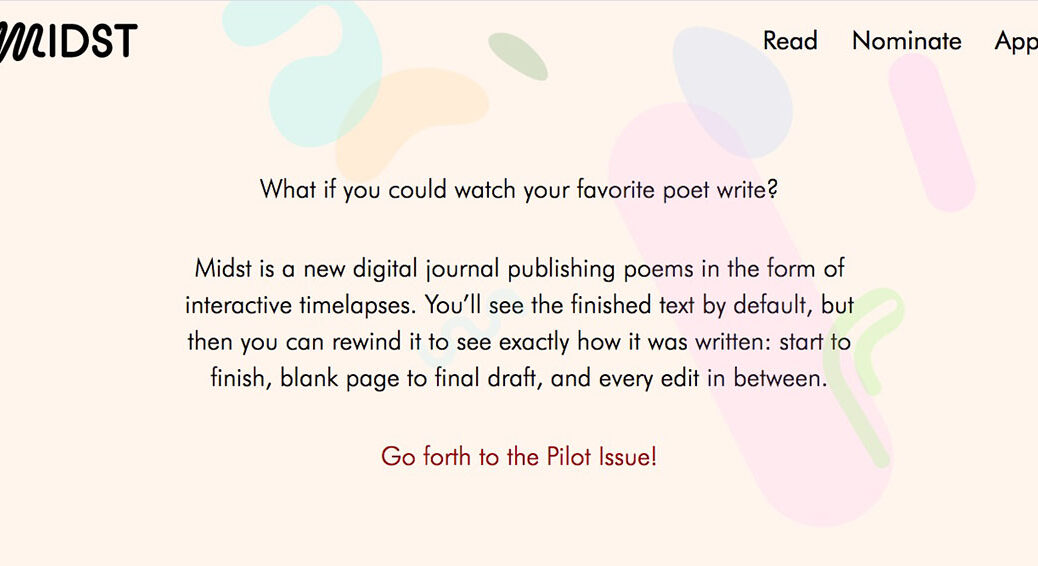 A poem in its printed form can feel complete and final. What I have learned, though, about poetry as both a reader and writer is that it is never linear. I don’t usually read a book of poems from start to finish – I jump around the book, pull phrases here and there. Writing poetry is even more complicated. A poem may start on a scrap of paper or in the Notes app on my phone. I may rewrite it by hand, then type it out again on my laptop. Drafting is never done in one sitting.

While every writer has their own process, I suspect many poets will admit to a similarly messy approach to drafting. And what if you could witness that process in real time? Poet, artist, and UT MFA student Annelyse Gelman and her collaborator, software programmer Jason Gillis-Grier, seek to answer that question through their delightful new poetry journal Midst.

Midst, which launched its inaugural issue in December 2019, provides readers a time-lapse view of a poem’s drafting process. Readers can watch the entire process from start to finish, or move around the timeline by rewinding or fast-forwarding. Each version of the poem is time-stamped, demonstrating that poems do not just magically appear but rather are the product of weeks, or even months, of work. This peek into the lengthy process of editing is intentional. Gelman and Gillis-Grier state on the journal’s website that they hope that Midst will demystify poetry and make it more accessible by showing the reader the writing process.

Gelman and Gillis-Grier have plans to expand the project with the Midst app, which will allow poets to capture their drafting process and then submit their time-lapse poem to the journal. Right now, featured writers are nominated and invited to submit versions, but with the app, they can open up the journal to a wider audience of writers and readers directly.

April is National Poetry Month. While this year’s celebration is marked with a more somber tone due to the global pandemic, it also feels fitting to enjoy poetry from home through experimental, interactive projects like Midst and Relineator. If this has inspired you to further explore poetry, April is the best time of year to do it! Take a look at this curated selection of poetry ebooks on the UT Poetry Center’s guide. Once our print collections open again, you can find Annelyse Gelman’s book Everyone I Love is a Stranger to Someone and many other great collections of contemporary poetry at the Poetry Center’s physical location in the Perry-Castañeda Library. 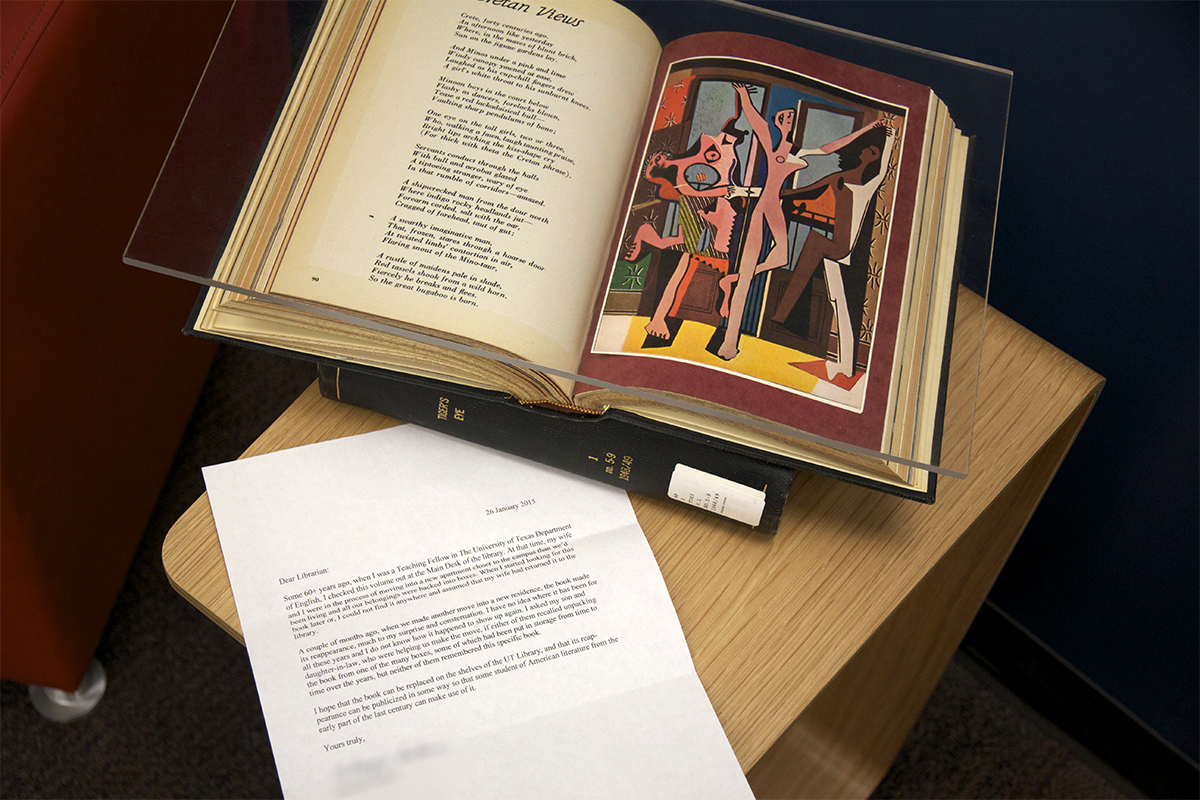 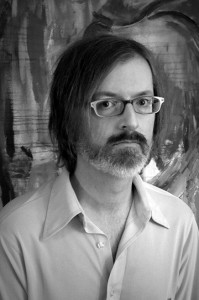 HWW: Good question. What makes me plug in an electric guitar and make loud horrendous noise has to come from a much different urge than the one making me get to a quiet place, alone, to jot down a poem. END_OF_DOCUMENT_TOKEN_TO_BE_REPLACED

On a steamy day in September, renowned poet and fiction writer Ken Fontenot welcomed Sean O’Bryan, Manager of Preservation and Gifts Processing at the UT Libraries, and I into his downstairs apartment. The walls in the living room and hallway were lined with bookshelves packed with brightly-colored poetry, poetry journals, writing guides, and stacks of chapbooks. This is a poet’s home, and Fontenot wants these bound words to feed our next generation of poets. Ken Fontenot received the Texas Institute of Letters Best Book of Poetry Award for his 2013 In a Kingdom of Birds (Pinyon Publishing), his second book of poetry; he has also published translations of German poetry and a novel. The poetry began when he attended a reading series at Tulane, his alma mater, and seemed more possible when he made his way to the Ruth Stephan Poetry Collection at The University of Texas at Austin Libraries.

In the 1980s Fontenot moved from his home in New Orleans to Austin and to UT where he would receive an MA in German Language and Literature. While here, he found himself at the Flawn Academic Center, in a room adjacent to what was then the Undergraduate Library, a room full of poetry. “You go on filling your jar of hope with yet more hope,” he wrote in A Kingdom of Birds. Ruth Stephan founded the Poetry Collection at UT Austin in 1965, and Fontenot realized amidst these books and poetry reading events that he was a poet. The influence of the Poetry Collection stayed with him.

Last year he decided he wants his collection to make poetry possible for other potential poets and readers. His donation will add hundreds of volumes and contributes to an ongoing revitalization of the Ruth Stephan Poetry Collection, now on the 6th floor of the Perry-Castañeda Library, in collaboration with the English Department and the New Writers Project. Ken Fontenot, along with the UT Libraries, hopes that the sweet cacophony of verse he has added to the Ruth Stephan Poetry Collection will feed you, poet. Revel in the work of Rosemary Catacalos, Kay Ryan, Cyrus Cassells, Ai, Louise Gluck, Naomi Shihab Nye, Mary Oliver, W. S. Merwin, Rita Dove, Billy Collins, and many more. You’ll see these titles added to the shelves over the next couple of months.

Fontenot’s fiction towers still in his apartment on other shelf-lined walls. These books, he says, he is keeping as he writes his second novel.