Love is in the air for the spring’s entrée edition of Science Study Break.

Dr. Timothy Loving of the School of Ecology’s Department of Human Development and Family Sciences observes the ups and downs of relationships in a special Valentine’s presentation of our ongoing series at the intersection of science and pop culture.

Loving will use scenes from (500) Days of Summer, Moonrise Kingdom, Eternal Sunshine of the Spotless Mind, Crazy, Stupid, Love, among others, to explore the dynamics of romance.

Loving’s research focuses on the relationship support process, with an emphasis on investigating the reasons for — and consequences of — romantically-involved individuals’ conversations with friends and family about the romantic relationship.

The free event takes place in the Student Activity Center Auditorium (SAC 1.402) at 6 p.m. on Tuesday, February 12, 2013. Free pizza (while it lasts) for attendees.

If you are a fan of Sherlock Holmes, or are comforted by the brogue of the British tongue, then you are in luck: last fall’s Sherlock Science Study Break is now up on the university’s YouTube channel for your viewing pleasure. Enjoy.

If you happened to have the misfortune not to be in attendance at the special installment of Science Study Break featuring Jim Ottaviani earlier this fall, well, you’re now in luck.

Comic writer Ottaviani’s extended commentary on his subject – nuclear physicist and virtuoso renaissance man Richard Feynman – that kept the crowd alternately laughing and thinking throughout the evening is now up and available for viewing on the university’s Know website, so check it out.

The final Science Study Break of this fall season is elementary.

In the first tag-team take on science in pop culture, Dr. Jim Bryant (Biology) and Dr. Sam Gosling (Psychology) investigate the immortalized detective’s use of statistics, observations of personality and deductive prowess in the BBC’s Sherlock and Granada Television’s Sherlock Holmes series.

And just in case you’re a bit peckish for more than just some brain food, there will be an ample supply of pizza from Austin’s Pizza.

SSB starts tonight at 6pm in the Auditorium of the Student Activity Center. Free and open to all comers.

Great apes! The October installment of Science Study Break features Professor Emeritus Claud Bramblett of Anthropology dissecting scenes from Project Nim and Planet of the Apes movies to see how they measure up to the actual biology and social life of apes.

Bramblett has authored a corpus on primates, including the book Patterns of Primate Behavior.

The program takes place in Welch Hall, Room 1.308, at the corner of 24th & Speedway, on the campus of The University of Texas at Austin. 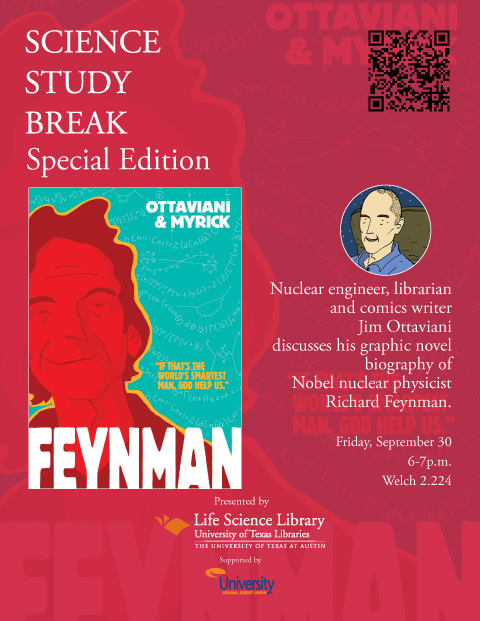 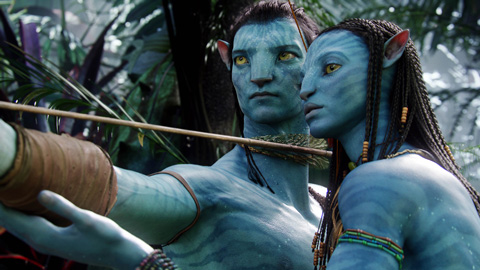 The Life Science Library’s Science Study Break program will wrap up its season on Wednesday (4/13) with an examination of James Cameron’s most recent blockbuster Avatar.

Dr. Misha Matz of the School of Biological Sciences will analyze biological fact and fiction in the fantastic world of the film.

Pop culture and the academy collide as Science Study Break features relevant faculty and experts from The University of Texas at Austin discussing the reality and fantasy portrayed as fact in science-themed books, television and film. Past presentations have featured presentations on bioterrorism and its treatment in the Fox thriller 24, artificial intelligence gone wild in 2001: A Space Odyssey, the comic realities of Spider-Man and epidemiological models for the proliferation of zombies.

UPDATE: You can view Matz’s Avatar presentation on the university’s YouTube channel. Thanks, Misha. 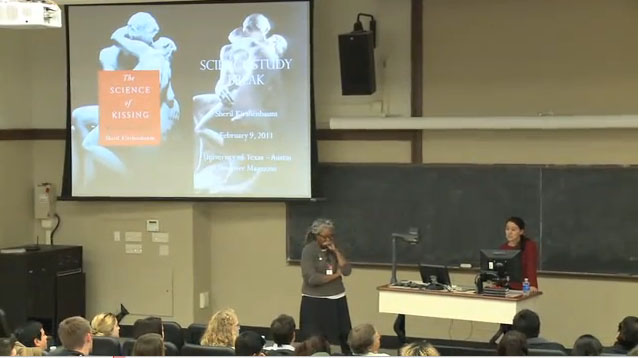 In case you were unable to attend last week’s first Science Study Break of the spring (or if you just want to extend the Valentine’s Day theme a bit longer), check out the video of Sheril Kirshenbaum‘s presentation on the Science of Kissing now available on the university’s YouTube Channel. 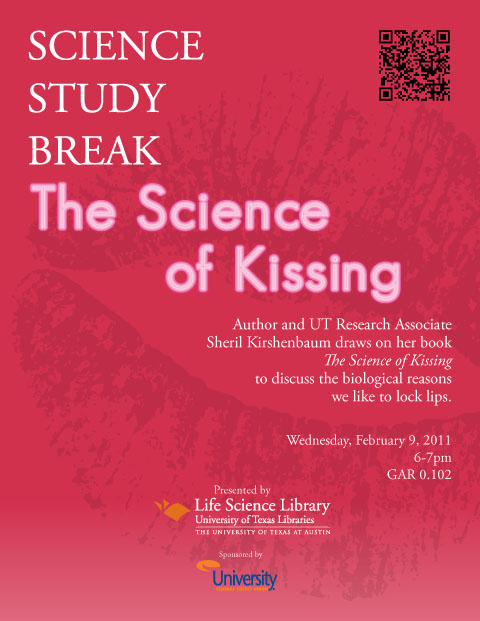 Science Study Break returns this Wednesday (weather permitting) with a special Valentine’s installment of the program.

The popular edutainment series hosted by the Life Science Library features noted researcher Sheril Kirshenbaum at the lectern discussing the biological impetus for kissing. Kirshenbaum’s book The Science of Kissing: What Our Lips Are Telling Us has helped to drive a recent public interest in philematology.

Takes place in Garrison Hall, Room 0.102, southeast of the Tower at Inner Campus Dr. & 22nd St. Refreshments(cake!) and lip balm will be provided. Free and open to the public. 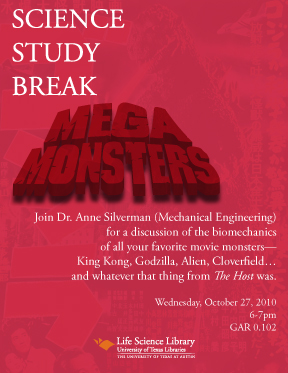 What is that rumbling!? Ah, it’s the final Science Study Break of 2010 here to crush you under its enormity.

The program takes place in Garrison Hall 0.102 with free snacks and compelling conversation, so come and be edu-tained.

Pop culture and the academy collide as Science Study Break features relevant faculty and experts from the University of Texas at Austin discussing the reality and fantasy portrayed as fact in science-themed television and movies.