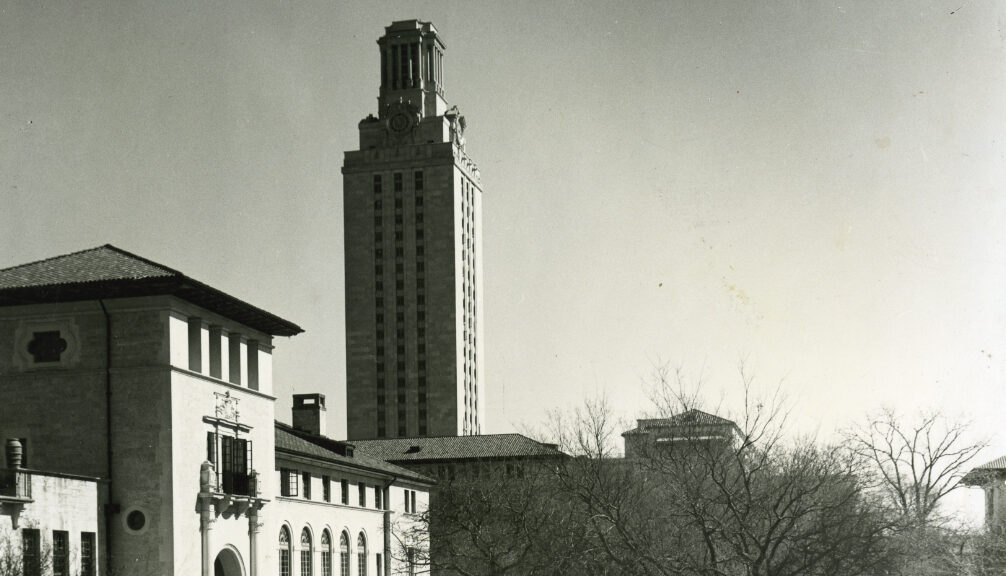 On the night of March 24, 2022, the UT Tower will be lit in honor of the centennial of a crown jewel of our campus—the Nettie Lee Benson Latin American Collection. Established as the Latin American library on campus in 1921, the collection is beloved by students and faculty, and visited by scholars from all over the world.

The collection was named in 1975 upon the retirement of revered head librarian and historian Dr. Nettie Lee Benson, who served as its director for thirty-three years, retiring in 1975. The stewardship of Mexico-born historian, archivist and educator Dr. Carlos E. Castañeda from 1927 to 1943 was similarly indispensable in the library’s earlier years. In 2011, the Benson joined forces with the Teresa Lozano Long Institute of Latin American Studies (LLILAS) in a partnership known as LLILAS Benson Latin American Studies and Collections. This partnership has allowed for an expansion of the Benson in the areas of digital scholarship, post-custodial archiving and archiving of Indigenous languages of Latin America.

This short video highlights the Benson

To honor the Benson Centennial, The University of Texas at Austin has invested in an interior redesign of the Benson’s main reading room—the first since its construction in 1971. The newly refurbished 6,734-square-foot room is the main entrance to the library and the heart of a place frequented by thousands of visitors each year.

The Tower lighting on March 24 coincides with the grand opening of this beloved space, renamed the Ann Hartness Reading Room, in honor of former head librarian Ann Hartness, whose thirty-eight-year tenure at the Benson enriched Brazilian studies and collections at the university. Its naming was made possible by a gift from Hartness’s son and daughter-in-law, who have also established the Jonathan Graham and Elizabeth Ulmer Fund for Library Materials on Brazil, an endowment to enhance the collection in the field of Brazilian studies. Graham and Ulmer have dedicated the remaining portion of their gift to create the Ann Hartness Benson Collection Matching Fund.

The Benson Centennial Tower lighting is a moment for hope—that this jewel of the University of Texas Libraries may continue to open its doors to the university community and beyond for many years to come, that we may continue to pursue digital projects that make our collections available worldwide through open access, and that support for the richness of this collection will be a means to continue its growth, its inclusiveness and its accessibility to an ever-expanding audience.

Support the Benson’s next century with a donation to the Drs. Fernando Macías and Adriana Pacheco Benson Centennial Endowment. To explore giving opportunities for the Benson Latin American Collection, contact Hannah Roberts at h.roberts@austin.utexas.edu. 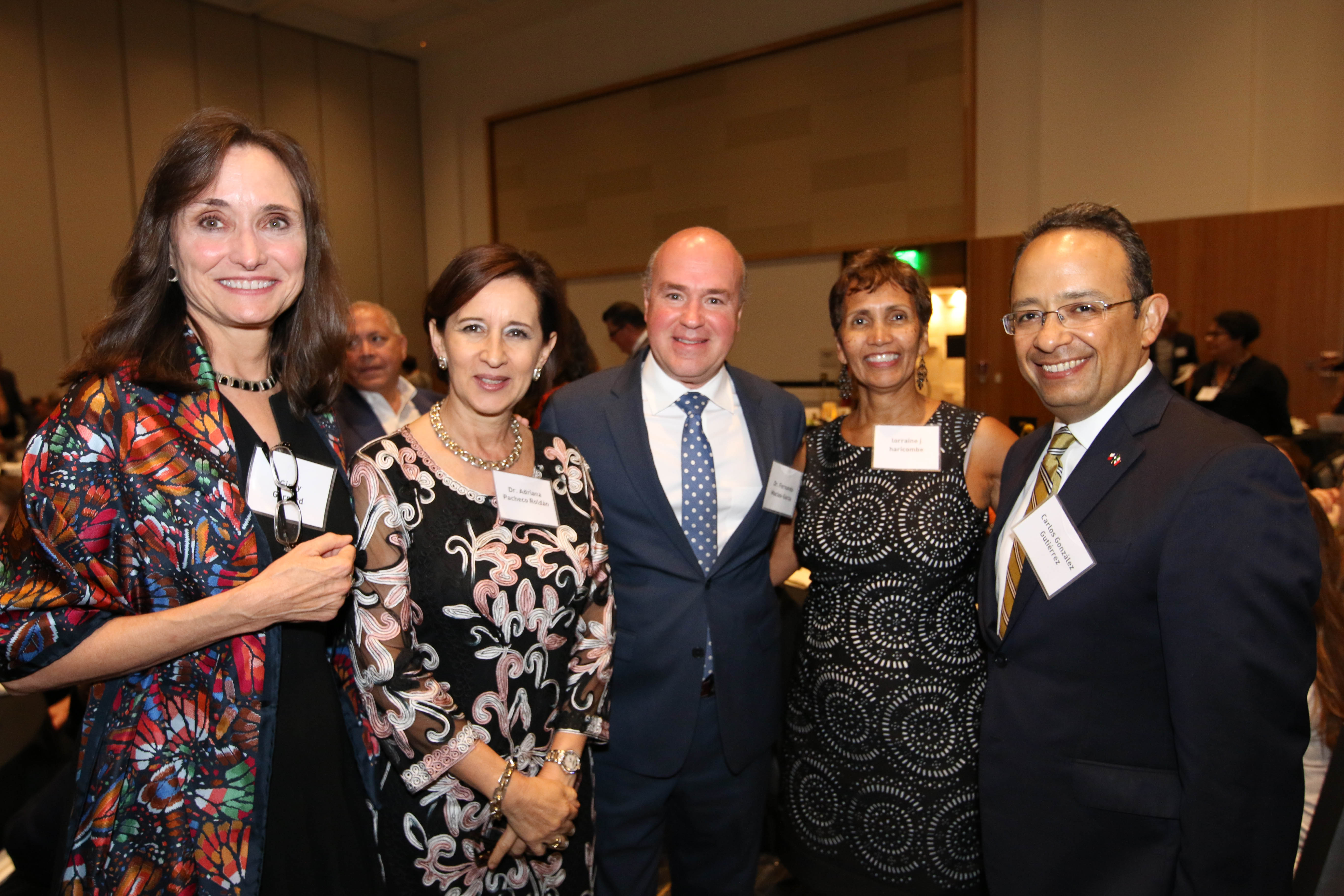 “The first time I walked into the fourth floor of the Nettie Lee Benson library, as a recently admitted PhD student, tears ran down my cheeks. I remember that moment, when I was there, alone, looking at that iconic corridor with hundreds of shelves and thousands of books. My tears were for excitement because I understood that that place was going to be a second home for me for many years to come.”

With these heartfelt words, spoken at a September 6 dinner announcing the centennial campaign for the Benson Latin American Collection, Adriana Pacheco Roldán exhorted assembled guests to join her in a project involving both the heart and the preservation of memory. Pacheco is chair of the International Board of Advisors established by University of Texas at Austin President Greg Fenves. She and her husband, Fernando Macías Garza, both hold doctorates from Texas. The couple has donated $50,000 to establish the Benson Centennial Endowment, which officially kicks off the countdown to the collection’s 2021 Centennial.

Pacheco was a keynote speaker at An Evening of Discovery, a gala dinner hosted by the University of Texas Libraries and the Provost’s Office to officially kick off the Benson Centennial campaign. As is fitting for a PhD in literature, she began her speech by evoking Aureliano Buendía, the patriarch of Gabriel García Márquez’s One Hundred Years of Solitude, who “fought against the plague of memory loss suffered by all inhabitants of Macondo” by labeling every object he could. “For almost 100 years, the Nettie Lee Benson Latin American Collection has been a place to keep our memories and our heritage,” said Pacheco.

Yet the recent tragic loss at Brazil’s National Museum of virtually all of its contents means that we must take responsibility for protecting the treasures of the Benson, Pacheco continued. Again invoking family and generational ties, she laid out a challenge to the assembled guests:  “As we say in Spanish, you are the padrinos, the godfathers and godmothers, of the Benson Centennial Endowment launch, and I invite you to join our efforts: Give now, give today, give later, find somebody willing to give, promote, spread the word, come and visit, join the events, make the Benson Collection part of your lives.” 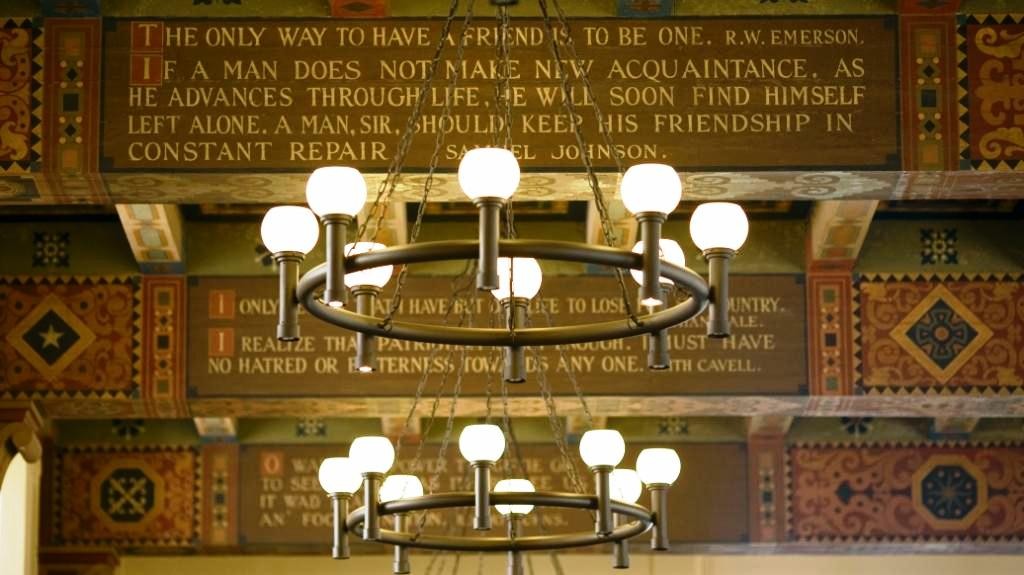 For those wishing to honor a loved one associated with excellence on the Forty Acres or someone who forever impacted the University of Texas, look no further than the Hall of Noble Words, the university’s most distinguishing landmark and symbol of academic excellence.

Bookcase and Premier Bookcase namings  are now available starting from $5,000 to $15,000. Spaces may be named by individuals, groups or corporations through payments over time. Request more information here. 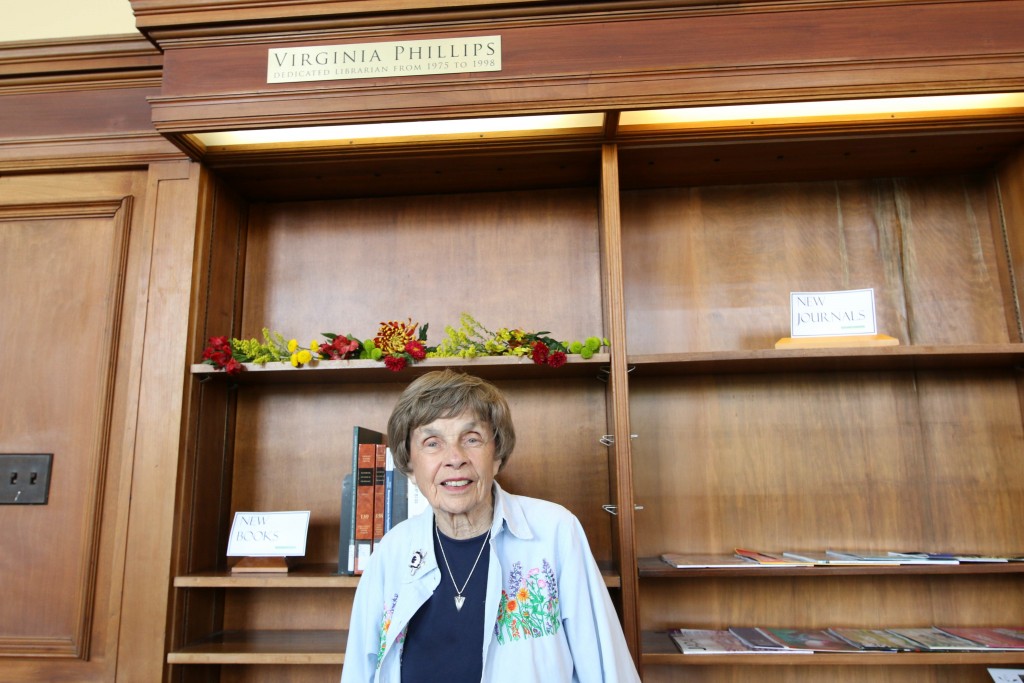