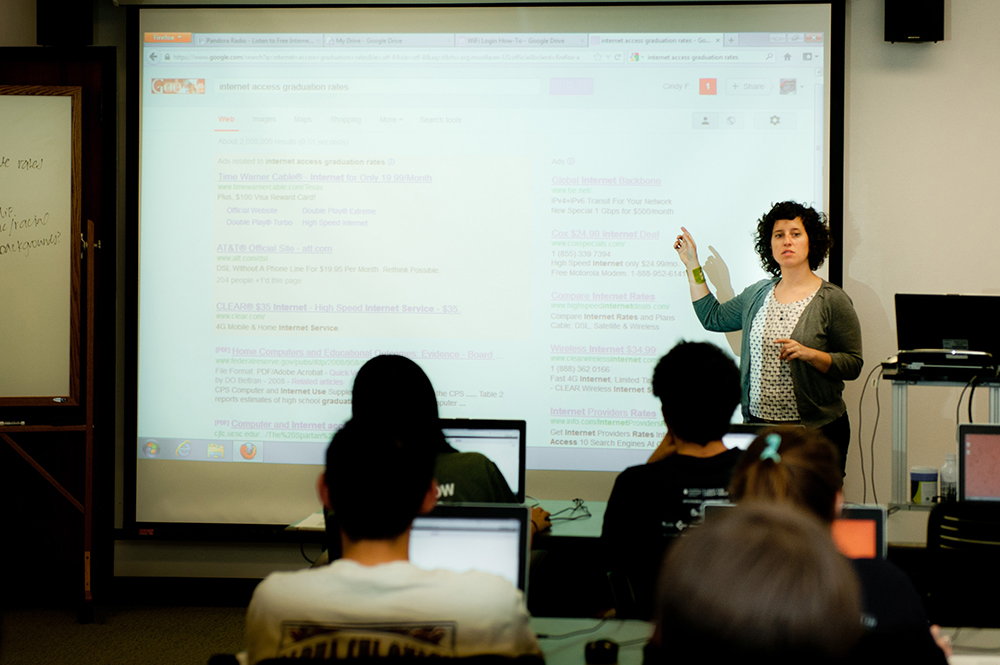 Leading up to the opening of the Learning Commons, we’ve spoken in broad terms about the impact of having a suite of student resources and services co-located for ease of access and use, and how that convenience is expected to improve student outcomes. Much of the talk regarding that impact of the Learning Commons has centered on the process and completion of finished products of a more temporal nature such as reports, projects and other assignments, but beyond the resources — technical help, knowledge resources and technology — that will serve as the basis for user productivity, it’s worth considering the persisting influence that the learning opportunities supported by the new space will provide to the next generation of Longhorns. 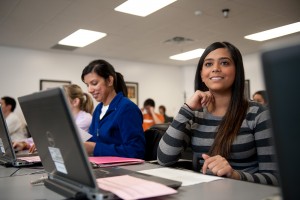 Staff in the Libraries’ Teaching and Learning Services (TLS) unit has played a central role in planning the Learning Commons, and their activities will have a significant impact on the success of the initiative. The longstanding relationship between TLS and the University Writing Center was essential to the relocation of UWC to the Perry-Castañeda Library, and much of the vitality in the Learning Commons will be determined by how the partnership between the two groups evolves over time. UWC’s nascent presence has already reaped ideas for collaborating with the Libraries on programming in the new space, and coordinating with other student resources around campus — such as the Sanger Learning Center — will allow a crossover between the provisional service needs of users for the purpose of completing assignments and the generation of lasting skills like interviewing, public speaking, information literacy, and much more.

TLS emerged in 2002 — at the time designated Library Instruction Services — to take the place of the Digital Information Literacy Office (DILO) and expand on its mission to integrate information literacy into the campus-wide curriculum for general education, which it successfully accomplished in 2010. The unit’s name evolved to Teaching and Learning Services as its mission has expanded to represent a more comprehensive view of the academic landscape and the ways in which students and faculty interact to share knowledge and experience.

By its increased involvement in campus curriculum via information and digital literacy, TLS has routinely collaborated with faculty on assignment design and presents course-integrated classes in hands-on classrooms in the libraries. They’ve also created video tutorials on subjects such as avoiding plagiarism for integration into course web sites and embedding in online courses. Through a combination of these methods, TLS now reaches almost 3,000 lower division undergraduates every year. 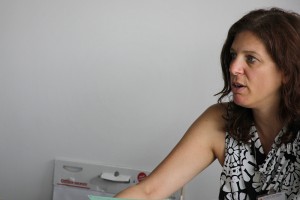 “The Learning Commons isn’t just about co-locating academic support services for ease of access but is about collaborating in new ways across those departmental lines to better support teaching and learning,” says Michele Ostrow, head of the Libraries’ Teaching and Learning Services unit. “We’re fortunate to work closely with a lot of fantastic faculty who teach in our freshmen programs and are committed to helping the excellent high school students who get into UT become excellent college students.” END_OF_DOCUMENT_TOKEN_TO_BE_REPLACED 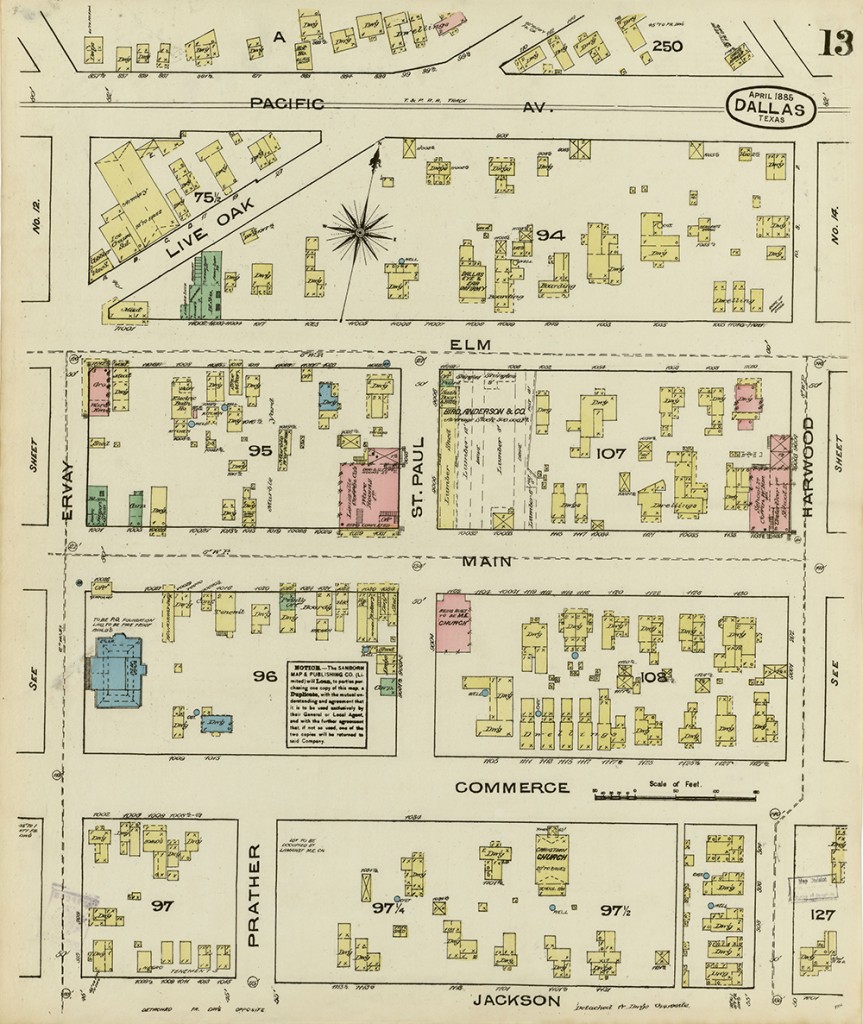 Founded in 1867 by D. A. Sanborn, the Sanborn Map Company was the primary American publisher of fire insurance maps for nearly 100 years. A 2007 partnership with the Briscoe Center for American History resulted in a multiyear scanning project that made the Sanborn Fire Insurance Maps for the state of Texas and Mexico (1877-1922) available online through the PCL Map Collection.

Over 10,000 maps were scanned primarily from the Briscoe’s collection, with additional items ingested from the most comprehensive collection of the maps at the Library of Congress, Geography and Map Division, in Washington, D.C.

The information on the maps — which were published to determine fire insurance risks of particular buildings — has a multitude of uses for historians, urban planners, architects, social scientists, geographers, genealogists, environmentalists and anyone interested in the history and growth of cities.

Maps include details regarding the shape and size of residential and commercial buildings, street addresses, block numbers and property boundaries, as well as type of construction, type of roof, building height, location of windows and doors, proximity to fire hydrants and alarm boxes. For many of the maps, multiple editions exist that allow for the study of change over time for a particular area.

Summer is the time for housekeeping around the Libraries, and much like undertaking the reorganization of one’s own closet, an occasional unexpected discovery occurs that either provokes nostalgia or rouses curiosity.

The latter was the case when staff at the Library Storage Facility at the Pickle Research Campus in north Austin recently came across more than 400 reels of microfilm which appeared to document the entire card catalog of the Libraries through images of each individual record. 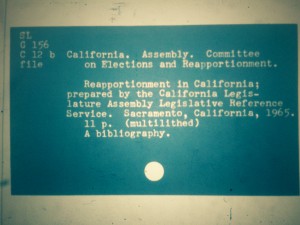 Evidence dated the media from the late 1960s to the early 1970s, but none of current Libraries staff had a clue as to the reason that an entire catalog of just over 2 million volumes (at the time) would’ve been recorded in such a way.

Enter the institutional memory of a loyal retiree class.

Associate Director for Collections and Technical Services Robin Fradenburgh put out the call to a cadre of ex libris stalwarts to see if they could unpack the Riddle of the Reels.

“We are calling on our dearly missed retired colleagues to help us with this mystery.  We have about 400+ of these reels of film of catalog cards.  Stephen (Littrell) looked at three of them to see if they had dates…one didn’t, one looked like it was 1964 and the other was 1973.  Did we used to make films of our catalog cards as back up and do you see any reason we need to keep them?  Ben (Rodriguez) says they were added to LSF very early on.”

Thanks….none of our institutional memories go back that far.

There are no guarantees when seeking an answer to a 40-year old question, but the former librarians didn’t miss a beat.

Of course, I wasn’t there before 1980, but when at the University of Pennsylvania, it was the year 1968 of upheaval of student protests, campus takeovers, etc. that the Penn Library experienced some incursions in which trays of catalog cards were dumped on the floor helter-skelter (as well as books being swept off stack shelves).

Those attacks led several academic libraries, including Penn, to microfilm either their catalogs or shelflists.

And in further validation,

“I’m remembering a special project to microfilm the card catalog as a precautionary measure in the wake of student unrest on a number of college campuses.  The project may well have gone on for some time, but card microfilming was never a routine back-up procedure that we did for years on end.

So, the mystery solved and a lost history unearthed and passed along, the summer cleaning continues, and we’re reminded that technology has made preserving the Libraries’ catalog just a little less daunting than it used to be.

Thanks to Libraries alumni Bob Stewart and Al Rogers for bringing their respective knowledge and memory to bear. 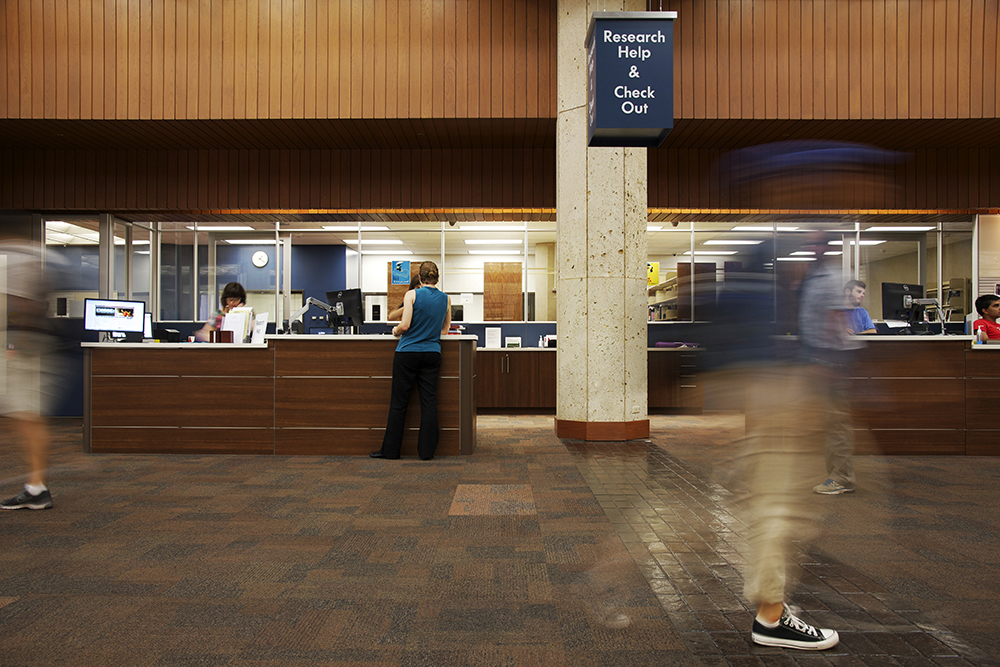 Think back to your time on campus.

What do you remember?

I can tell you what my first few days on the Forty Acres looked like: I walked across campus to the North Administration Office for orientation, walked back to my office to eat lunch, then walked to the Flawn Academic Center to have my identification card created, walk back to my office, and finally walked to the Brazos Parking Garage at the end of the day.

If your experience as a student or faculty member was anything like mine as a new staff member, you can probably relate: working and studying at the University of Texas means you get around quite a bit!

As you might imagine, the University of Texas Libraries is one of the many locations that students flow in and out of throughout the course of their week. With one of the largest footprints on campus, our nine libraries see over 2.5 million visitors every year.

University of Texas Libraries is more than a location. It is a destination that provides resources and expertise that are fundamental to student success.

Research shows that first-year students who used library services in their first semester have a higher grade point average and are more likely to graduate in four years.

The Libraries are making a huge investment to improve the student experience both in our physical spaces and with enhanced technology-rich supportive services. 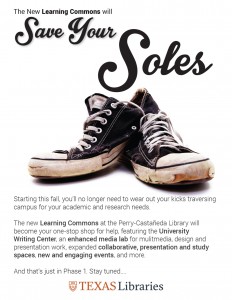 The Learning Commons at the Perry-Castañeda Library is our first step toward our goal of becoming a one-stop-shop for research, writing, digital media technology, and oral communication.

Will you join me in supporting our Save our Souls campaign? Each gift will help us provide the technology and academic support services and transform the undergraduate learning experience for our students.

If you or your company is interested in contributing a matching gift during the campaign, please contact Natalie Moore for more information.