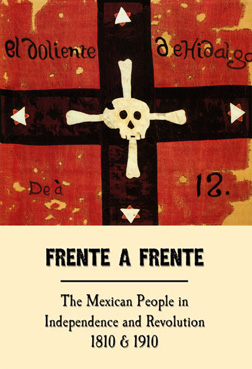 Timing is everything: the Benson opens its exhibition Frente a Frente: The Mexican People in Independence and Revolution, 1810 & 1910, this evening. 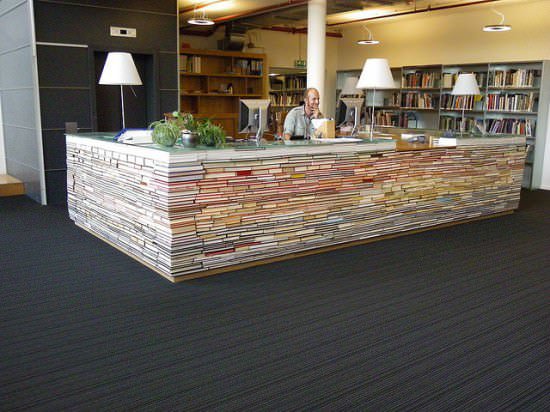 An interesting repurposing project from the Architecture Library at Delft University of Technology in the Netherlands.

(via Recyclart via Boing Boing) 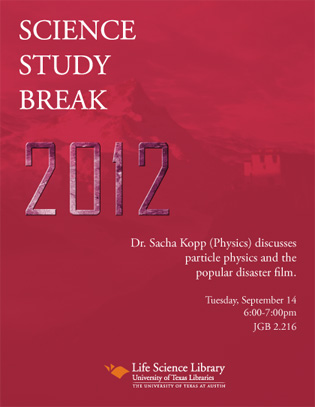 It’s a new semester and that means it’s a new season for the Life Science Library’s Science Study Break.

The first installment of the fall also sees our first return speaker. Physics professor Dr. Sacha Kopp will discuss the topic of particle physics as it relates to the destruction of Earth in the popular disaster film 2012.

Dr. Kopp will speak this evening (9/14) from 6-7pm in room 2.216 of the Jackson Geological Sciences Building on the East Mall.

Just in time to celebrate the opening their new exhibit Frente a Frente: The Mexican People in Independence and Revolution, 1810 & 1910, the Benson Latin American Collection is holding a contest apropos of the anniversaries it is commemorating.

As part of our ongoing promotion of Texas Performing Arts 2010-2011 season, the current contest is for two tickets to Operación Clown: Cállate (Shut Up!), for either the Wednesday, September 15, show in Spanish, or the Thursday, September 16 English version.

Operación Clown is renowned for their innovative use of masks, puppets, and cabaret theatre based on theatrical clown technique.

This internationally celebrated theatrical group will bring the acclaimed piece Cállate to the McCullough stage. Narrated with an explosive mixture of melodrama and irreverent humor, this love story set at the time of the Mexican Revolution combines drama, comedy, wrestling and images inspired by the Golden Age of Mexican cinema to fuel a cast of characters based on stereotypes of the period.

For your chance to win, visit the Operación Clown Trivia Question page and fill out a brief questionnaire.

And regardless whether you win or not (but especially if you do), join your friends at the Benson Latin American Collection in Sid Richardson Hall from 5-7pm on Thursday the 16 for the opening reception for Frente a Frente for a first taste of the exhibit and delicious food from El Naranjo.

The Benson Latin American Collection will open an exhibition commemorating the dual anniversaries of Mexico’s Independence and Revolution next Thursday, September 16.

An opening reception will take place from 5-7pm on Thursday, September 16 with food and drink provided by El Naranjo. If you would like to attend, please RSVP to emcquade@austin.utexas.edu or call 512-495-4363.

Frente a Frente will be on display through mid-March, 2011, and can be viewed weekdays, Monday through Friday, 9am- 5pm, and Saturday, 1-5pm.