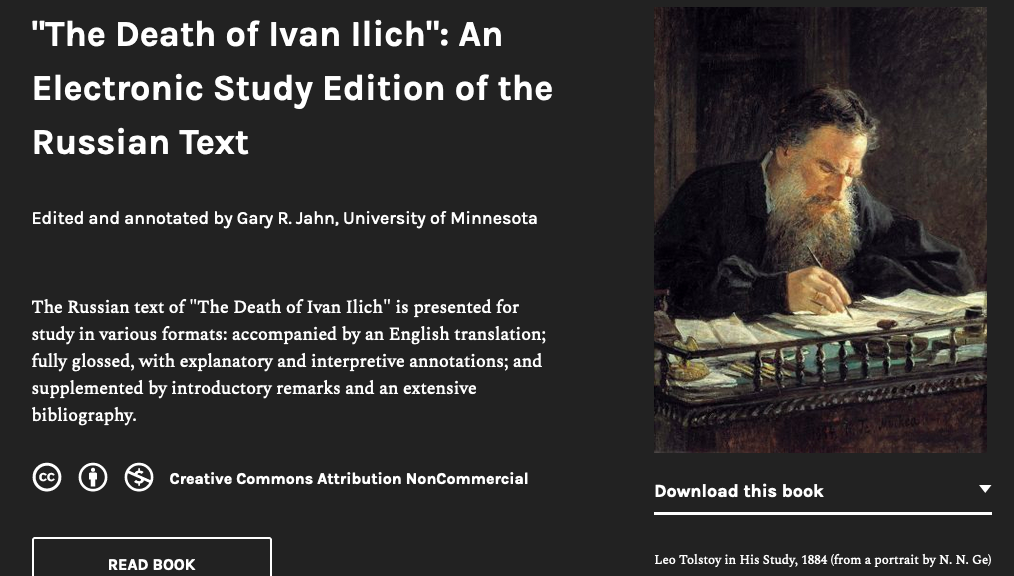 The project “The Death of Ivan Ilich”: An Electronic Study Edition of the Russian Text, based at the University of Minnesota Libraries, is an openly published resource highlighting how digital media can supplement and enhance the close reading of literature. The project contains the text of Lev Tolstoy’s novella The Death of Ivan Ilich in multiple formats, including the original Russian with an English translation side-by-side, versions with hyperlinked  explanatory and interpretive annotations, contextual introductory remarks by the project’s author, and an extensive bibliography. This is an important resource for any serious study of Tolstoy’s work, and it being made available in an open and remixable format is a boon for students and instructors alike.

Tolstoy’s novella is a seminal work of world literature, and is studied broadly both in translation and the original Russian. Useful as a tool for students both of the Russian language and of Russian literature, this bilingual edition bridges the gap between language pedagogy and general literary study. The original Russian text–published in 1886–is in the public domain, as is the English translation by Louise and Aylmer Maude. The introduction, annotations and selected bibliography by Gary R. Jahn, Professor of Russian Language and Literature at the University of Minnesota, are licensed under a Creative Commons Attribution-NonCommercial license. This license allows users to share and adapt the text–that is, “copy and redistribute the material in any medium or format” and “remix, transform, and build upon the material” as long as the license terms are followed.

The main interface for the project was built in Pressbooks, a platform that allows users to create and share openly published digital editions of  books that can also be downloaded as PDFs. The edition includes its own identifying ISBN, allowing for easy citation, and is highly interactive. For example, the glossed version of the text, includes linked annotations that can be clicked on to read as you go through the text. Some of these annotations also include images illustrating elements of the text that may be opaque to contemporary readers; one, for example, includes an image of a funeral announcement from 19th-century Russia. These very helpful annotations can be viewed in both the English and the Russian versions of the text.

This edition is an important contribution both to open scholarship and the study of Russian literature. Allowing students and researchers to easily compare and contrast the original Russian with the translation in an accessible digital format is very helpful, as are the many explanatory notes and annotations included in the project. Furthermore, the bibliographies of both primary and secondary sources in multiple categories allows both the casual reader and the more dedicated student or scholar to explore further. In short, this online edition is a valuable example of the extensive and interoperatible possibilities of digital scholarship and open publishing.

For more information, please consult the UTL resources below:

Every year the United States honors women and men who have served the U.S. armed forces during war and peacetime on the anniversary of the end of World War I, November 11. Originally called Armistice Day, Veterans Day celebrated and honored the soldiers that lost their lives in World War I. In 1954, after World War II and the Korean War, the federal holiday was officially expanded to celebrate and honor all veterans.

The UT Libraries honors veterans by telling their stories, preserving their legacy in our collections, and making the materials that meant something to them available to researchers for generations to come.

Aside from some basic biographical information, we know very little about Col. Fenton. We know that he spent 28 years of his life serving in the U.S. Army, and in that time, he was infantry and infantry support in both World Wars. And he managed to preserve some essential tools of his deployment, his maps. The fact that these maps survived the treacheries of war is incredible. After Col. Fenton died, his family donated his military effects to the Army Heritage Center who offered UT Libraries the maps to fill in missing maps from our online Perry-Castañeda Library Map Collection. They exceed our expectations. The field printing and annotations alone make them exceptional, but also many were classified. We are fortunate to be able to preserve and share them with generations to come.

Visit the UT Libraries’ Exhibit to learn more about Col. Fenton and the context of his collection. The images accompanying this post and the exhibit are a fraction of the 84 maps in the Field Maps of Colonel Roland T. Fenton in the UT Libraries Collections portal.