The Benson Latin American Collection has established itself as a leader in the area of post-custodial archives — a systematic approach to preservation that places emphasis on providing for original materials to remain in the possession of its creators or cultural parentage. Such notable examples of the practice by the Benson are the projects that make up the Human Rights Documentation Initiative — including the Genocide Archive of Rwanda and the Guatemalan National Police Historical Archive — and Primeros Libros, a project to digitize the first books printed in the New World.

Most recently, though, staff from LLILAS Benson Latin American Studies and Collections and the Libraries have been building upon a project — initially funded from a 2014 Mellon grant award — that takes a more comprehensive approach to preserving the culture and history of Latin America.

Initial work was completed and the website for LADI was launched last November, and recently, the site (and the team that built it) was awarded the Excellence in Digital Libraries Award from the Texas Digital Library.

Theresa Polk, post-custodial archivist at the Benson and one of the project’s leads, is gratified by the success of the project, and looks forward to its future potential.

“It was tremendously exciting to see how the metadata facilitated these disparate collections talking to one another and to other Benson digital collections,” says Polk. “As the site continues to evolve, new collections are added, and researchers begin to actively engage it, we hope it will facilitate new insights into human rights scholarship in the region.”

The Human Rights Documentation Initiative and Alamo Drafthouse Films are giving away one pair of tickets to a screening of The Act of Killing playing at the Alamo Drafthouse from August 9-15.

The Act of Killing, directed by Joshua Oppenheimer and executive produced by Errol Morris (The Fog of War) and Werner Herzog (Grizzly Bear), documents how death squad leaders in Indonesia are celebrated as heroes and challenges them to “reenact their real-life mass-killings in the style of the American movies they love. The hallucinatory result is a cinematic fever dream, an unsettling journey deep into the imaginations of mass-murderers and the shockingly banal regime of corruption and impunity they inhabit.”

For a chance to win tickets, answer the Human Rights Documentation Initiative trivia question by 11:59 pm on Thursday, August 8. 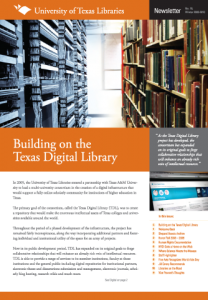 The Fall/Winter edition of the Libraries Newsletter is now online.

The issue features articles on the Texas Digital Library, some news on the Fine Arts Library‘s Sam Shepard collection, the Human Rights Documentation Initiative in Burma and on the web, the flowering of the Life Science Library‘s Science Study Break, and much more.

And please take some time to peruse back issues while you’re at it.