When Teaching and Learning Services initiated the PCL Media Lab pilot phase in the Fall 2014 semester, we opted to experiment with a unique staffing model. Partnering with the University Leadership Network, a similarly youthful campus initiative, we developed a tiered, three-year internship program that would synthesize our staffing needs with an effort to cultivate digital media expertise in the Libraries.

In Year 1, interns undergo basic training in audio, graphics and video software, following step-by-step tutorials that we developed in house. By the end of their first semester, we expect our interns to have a shared vocabulary in multiple areas of media production. They assemble a short podcast using Audacity, then reconstruct a digital collage in Photoshop, and finally use public domain footage to edit a short video with music in Adobe Premiere Pro. For the Spring 2015 semester, we encouraged our interns to specialize in a software area of their own choosing, and to propose a project with the most appropriate software. That approach resulted in two short films, a digital music composition, the first phase of a student organization’s website, a 3-D modeling project and a graphic guide to using the pilot lab’s scanners. Furthermore, the Lab Assistants produced tutorial guides to help users understand the workflows and technical vocabulary required to produce this work.

Starting in Fall 2015, we wanted the Year 2 Lab Assistants to improve on their existing strengths, develop their areas of interest and, when possible, create work that could benefit UT Libraries as an institution. What follows is a summary of the work done this year by our ULN Lab Assistants as part of the digital media training that forms the backbone of their internship, and helps us to offer expertise to users in the PCL Media Lab.

During the first semester, Product Design junior Whitney Chen and Fine Arts sophomore Jessica Vacek collaborated to produce a desktop calendar, copies of which were printed and sent to Libraries’ supporters. The pair took original photographs in different library branches around the 40 Acres, then embellished those pictures using Adobe Illustrator

In the spring semester, Jessica took a turn doing some work for Communications by designing our popular Greetings from the Library postcard, distributed for free in PCL and featuring iconic images of the branch libraries (such FAL’s hanging piano).

In another graphic combining freehand drawing with Adobe Illustrator, Jessica also gave us a new design for the birthday cards that UT Libraries sends to supporters. Much of Jessica’s artistic training has been in freehand techniques and photography (check out some of her work here: http://operation-jessica.tumblr.com/), so her internship in the PCL Media Lab has helped her to integrate more traditional media with new digital tools.

Whitney was equally busy with clever graphics work this semester, this time training her designer’s eye on promotional materials for one PCL’s most popular events, the visits from dog therapy groups. We’ve featured some of Whitney’s work on Tex Libris before  and there is more to view on her portfolio website, so we’ll just let these two pieces speak for themselves.

Video production and editing software is some of the most popular in the lab, so it’s no surprise that it was an equally popular area for our Lab Assistants to choose for specialty training. We featured one of these projects in Tex Libris earlier in the year, recounting how, using Adobe Premiere Pro, Charisma Soriano (Junior, Marketing + Film and Television), Lucia Aremu (Junior, Government) and Jocelyn Mendoza (Junior, Bilingual Education) “organized, shot, edited and produced a short documentary film” about the Freud Reia punk collection that the Fine Arts Library had recently obtained.

The video team took a more whimsical approach for their next project, using iMovie to stitch together a dreamy snapshot of life after hours in the PCL.

We unfortunately lost Jocelyn Mendoza to another internship at the beginning of the spring semester, but the video team benefitted from the addition of Computer Science junior Victor Maestas, who has been active in amateur filmmaking since high school. Working with Librarian for First-Year Programs Sarah Brandt, Victor, Charisma and Lucia produced an Orientation to UT Libraries video that will be used to help incoming freshmen get to know their way around different branches and library services.

With the increasing popularity of 3-D printing, and especially in light of the incipient makerspace in the Fine Arts Library, we are grateful to have the expertise of Thang Truong, a Biology junior, in the PCL Media Lab. Thang began experimenting with Autodesk’s  Maya software last year, and has significantly expanded his knowledge to include 3-D printing with Sketchup and more complex modelling techniques in Maya and Blender, another application offered in the Media Lab. The images below feature examples of Thang’s work, including an iPhone case that he printed through UT’s Innovation Station.

The PCL Media Lab Assistants continue to exceed our expectations and do a terrific job of helping our patrons in the lab. Next year we aim to offer more one-on-one and small group consultations with the Lab Assistants, allowing them to share their expertise with an increasingly large user base.

The PCL Media Lab wouldn’t be the resource it is without the presence of knowledgeable student staffers to help users to make the most of the available technology. These lab assistants are brought on board because of their familiarity with the software, and their practical and creative experience with it.

We’ve highlighted the work of users in the past, but we shouldn’t overlook the creative proclivities of gifted staffers, as well. Whitney Chen is a lab assistant and a Design major at the College of Fine Arts, where she’s honing, among other talents, her skills at digital illustration. Her job in the Media Lab is providing her more time to practice her art, a few examples of which are below.

See more of Whitney’s work and learn a little more about her at the Media Labs Tumblr.

Just over a year ago, the UT Libraries opened a pilot Media Lab  in a small section of the entry level floor of the Perry-Castaneda Library.  Under the purview of Teaching and Learning Services and equipped with 15 dual-monitor iMacs loaded with a long list of creative software, we hoped it would be a place for students to work individually or in groups to create and share digital media projects.  According to our preliminary assessment data and statistics, our hopes were realized and students took to our little lab like free pizza at a campus event.

Our Media Lab pilot was an opportunity to achieve two goals at once: First, provide an unrestricted space and high quality resources for students to create digital media projects regardless of their major or departmental affiliation and, second, to test out this service before a larger 44-seat Media Lab opens in Fall 2015 as part of the Learning Commons project.

So why a Media Lab in the library and why now?

Continue reading this post at the Learning Commons blog. 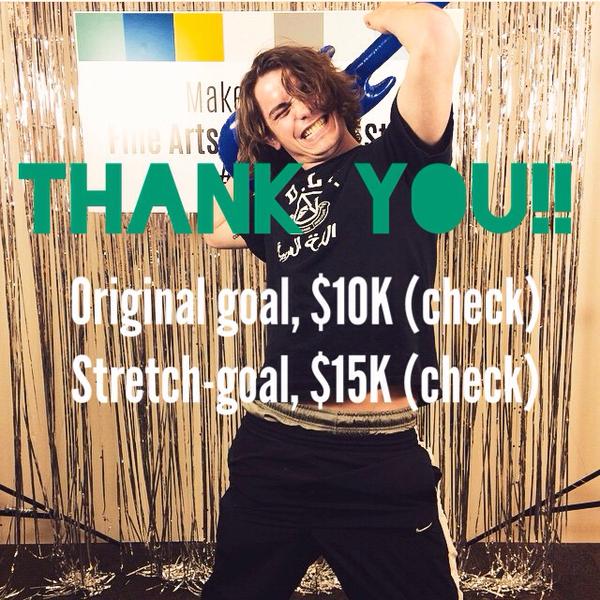 We are very thankful for those who contributed and helped us broadcast our message throughout the campaign.

A preliminary meeting has been scheduled to start brainstorming and planning for the actual construction of the Fine Arts Library Recording Studio. We hope to have everything ready for the fall 2015 semester.

While these tools are available in other areas on campus, they are restricted to students or a certain major. The Creativity Commons will be fully accessible to all current UT students, faculty, and staff.

To give a gift to support the Creativity Commons, click here, or click here to read a previous post with more detailed funding opportunities for individuals or corporations.

Special thanks to our campus and community partners who supported us during our HornRaiser campaign to build the Fine Arts Library Recording Studio: Austin’s Pizza, Tom’s Tabooley, Waterloo Records, KUT, KMFA, Butler School of Music, and Hook ‘Em Arts.

An offbeat bookstore has conceived an equally offbeat way to sell underappreciated titles.

Meet Biblio-Mat, a peculiar book vending machine created by designer Craig Small (of The Juggernaut) for The Monkey’s Paw in Toronto as an alternative to discount bins at the bookstore.

For $2, the rudimentary mechanics creak to life to provide both a random bit of reading material and unique shopping experience.

Though we often focus our thoughts and attention on the changing nature of libraries, it’s good to occasionally be reminded that our “storied” past is also part of the present.

Nearly ten years in the making, a new library recently opened outside of Rotterdam that is a monument to the book.

A pyramidal structure of wood, glass, stone and steel contains what may be the world’s largest bookcase, “Book Mountain” – a structure of staircases, pathways and terraces surrounded by some 50,000 books that spirals upward to a reading room and café at its peak.

And despite its remarkable design by Dutch architectural firm MVRDV, the building is more function than form, as it is set amongst a community of government housing complexes where the population has a 10% illiteracy rate.

See more photos here, and a report by the BBC, here.

The Fine Arts Library is participating in AIA Austin’s month-long austin x design program to “celebrate design in both the built and natural environments and demonstrate the ways that design can shape and improve daily life.”

From October 2 – 30, members of the Austin architecture and design community will display their creations alongside the permanent art collection of the Fine Arts Library (FAL) in the exhibit “More Than Architecture.”

Artists participating in the show include:

Items in the exhibit include sculpture (large and small), house model, photographs, furniture, glass, paintings, and decorative pieces, with 40 works from over 20 designers and artists.