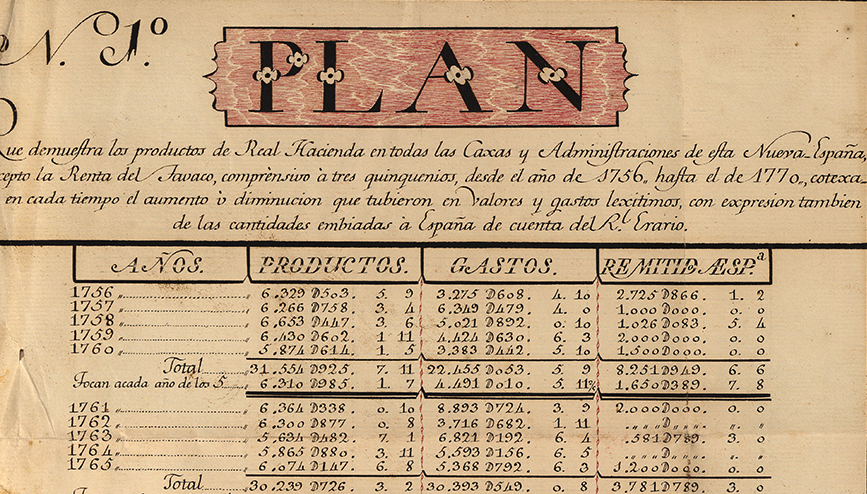 For almost three hundred years, the Spanish monarchs ruled over an expansive empire stretching from the Caribbean to the southernmost tip of South America. World history narratives situate Spain within a centuries-long clash between major powers over territory, resources, and authority in the Americas that ended with the wars of independence. However, these histories tend to devote less attention to the day-to-day processes that sustained imperial rule. My dissertation explores this question through an analysis of the underlying mechanisms that bound the people to their faraway king. A LLILAS Benson Digital Humanities Summer Fellowship helped me to create an online exhibition that demonstrates what the bureaucracy of empire looked like on the ground. (Visit the Spanish version of the exhibition.)

This interactive website serves as an interface with a section of the vast holdings of the Benson Latin American Collection: the Genaro García Collection. Through the exhibition, teachers, students, and community members can explore the events that unfolded when the king ordered a visita—or royal inspection—for New Spain (roughly, modern Mexico) in 1765. The inspection allowed the monarch to keep up to date on local happenings while also identifying areas that could be reorganized. This visita involved approximately seven years of examinations and reforms carried out through a cooperation between the monarch’s appointed visitador—or inspector—and local government workers.

The website offers high-resolution images of the thirty documents from the Genaro García Collection that pertain to this procedure, in addition to brief content descriptions, full transcriptions, information on the individuals involved, and maps of prominent regions mentioned in the sources. All of this information appears in an interactive timeline so that users can experience the process of bureaucracy at work.

This project benefited from the use of several digital humanities tools, including TimelineJS, FromthePage, and Transkribus. TimelineJS allowed for the creation of an interactive chronology containing the step-by-step process that the visitador followed as he inspected and reorganized the government of New Spain. For users looking to examine the documents beyond the site’s overviews, FromthePage and Transkribus generated full transcriptions of the sources.

These texts provide opportunities for further exploration, such as data analysis. For example, by feeding the transcriptions into the Voyant Tools website, I was able to generate a word cloud of the most commonly appearing words and phrases in the documents.

The Benson Latin American Collection holds documents covering many regions of the Spanish world across the sixteenth through the twenty-first centuries. During this time, Spain’s hold over its American territories required the constant interaction between royal officials and local populations, and that crossover was often messy. The 1765 visita of New Spain sheds light on the complexities of this process. My hope is that this online exhibition will expand the ways in which people can interact with these sources without having to visit the University of Texas campus in person, and learn from them about the day-to-day experience of imperial management.

Brittany Erwin is a PhD candidate in history. She was a LLILAS Benson Digital Humanities Summer Fellow in 2020.