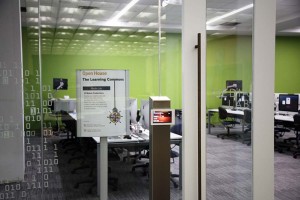 In a harried world where you can hardly escape the din of constant communication and the proliferation of electronic gadgets, there’s a nascent desire to slow down and take in the mad rush of life. You can find this peaceful revolt against modernity in the community of vinyl music enthusiasts or the slow food movement or in DIY communities that encourage personal creativity and self-sufficiency. And now there’s a community of like-minded folks who have found a similar passion in a device that is an almost perfect antithesis to modern concepts of technology.

The rediscovery of the typewriter by retro fetishists prompted filmmakers Christopher Lockett and Gary Nicholson to embark on making a documentary about the machine’s importance to both our past and our future.

The result of their work — “The Typewriter in the 21st Century” — will receive its Texas premiere in a screening at 6 p.m. on Friday, April 19, in the Fine Arts Library at the Doty Fine Arts building.

The documentary features 30+ interviews with authors, collectors, journalists, professors, bloggers, students, artists, inventors and repairmen (and women) who meet for “Type-In” gatherings to both celebrate and use their decidedly low-tech typewriters in a plugged-in world. Authors Robert Caro and David McCullough, combined winners of 4 Pulitzer Prizes, 3 National Book Awards and a Presidential Medal of Freedom, and both avid typewriter users, provide fundamental commentary about process and the value of slowing down, writing actual drafts and revising in a world of instant, draft-less editing.

The film was inspired by a May 2010 article in Wired magazine called “Meet The Last Generation of Typewriter Repairman.” Director Lockett and producer Nicholson discussed the importance of the typewriter in 20th century literature, their conclusion being that every great novel of the 20th century was written on one, and if typewriters are in their final days, they deserved to be celebrated one last time.

The screening of “The Typewriter in the 21st Century” will be followed by a Q&A featuring producer Gary Nicholson and John Payton, owner of a typewriter “museum” in Taylor, Texas.

The event will be preceded by a small public reception at 5 p.m.