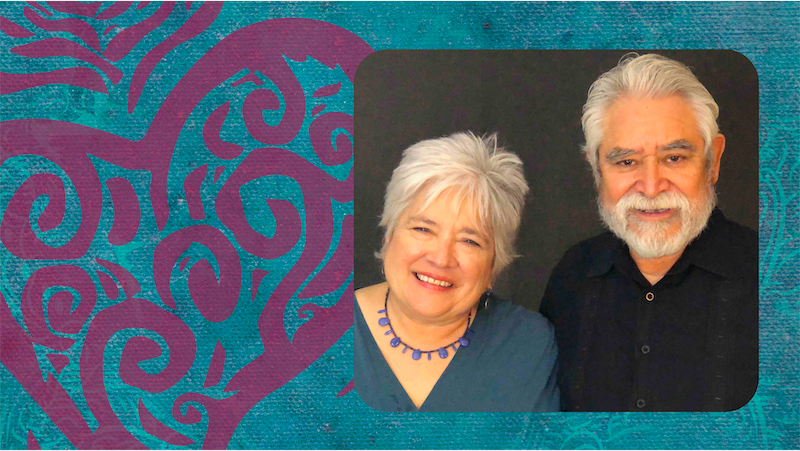 LLILAS Benson is thrilled to announce the return of the ¡A Viva Voz! Celebration of Latina/o Arts and Culture. The annual event, usually one of the highlights of the spring semester, was canceled in 2020 due to the recent campus closure for Covid-19.

Now that we’ve got an advanced degree in Zoom, we are pleased to announce Scene Onscreen: An Evening with JoAnn and Rupert Reyes, Founders of Teatro Vivo. This virtual event will be held on Thursday, April 1, 2021, at 7pm CDT. To register for the event and receive a link, visit Attend.com/AVV2021.

During the evening, hosted by Roxanne Schroeder-Arce of the Department of Theatre and Dance, the audience will be treated to recorded scenes from some of Rupert Reyes’s iconic achievements as a playwright, interspersed with conversation about the history of Teatro Vivo, the bilingual theater company that Rupert and JoAnn founded in 2000 and led for many years.

Scenes from Petra’s Pecado, Petra’s Cuento, and Petra’s Sueño; Crossing the Río, Cuento Navideño, Cenicienta, and the forthcoming film Vecinos will bring some levity to everyone’s evening, and it is our hope that the shared experience of laughter while enjoying these scenes will make the virtual a little more personal.

The JoAnn and Rupert Reyes Collection

The Benson Latin American Collection is the repository of the papers of JoAnn and Rupert Reyes, which contains a rich assortment of materials from their decades working with Teatro Vivo and other theater companies. According to the archival notes, “Teatro Vivo has garnered numerous nominations for acting, writing, and design from local theater award councils, including the B. Iden Payne Awards and the Austin Critics Table Awards, and the company continues to serve as an active contributor to the arts community in Austin. JoAnn and Rupert led the company as the executive director and artistic director, respectively, until they stepped down in 2016.” Both of the Reyes have received accolades for their work, including the Community Leadership Award from the University of Texas at Austin (their alma mater) in 2008 and the Partners in the Arts and Humanities award by the Austin City Council in 2011. They continue to serve as advisors to Teatro Vivo and remain significant cultural ambassadors for Latino theater in the United States. 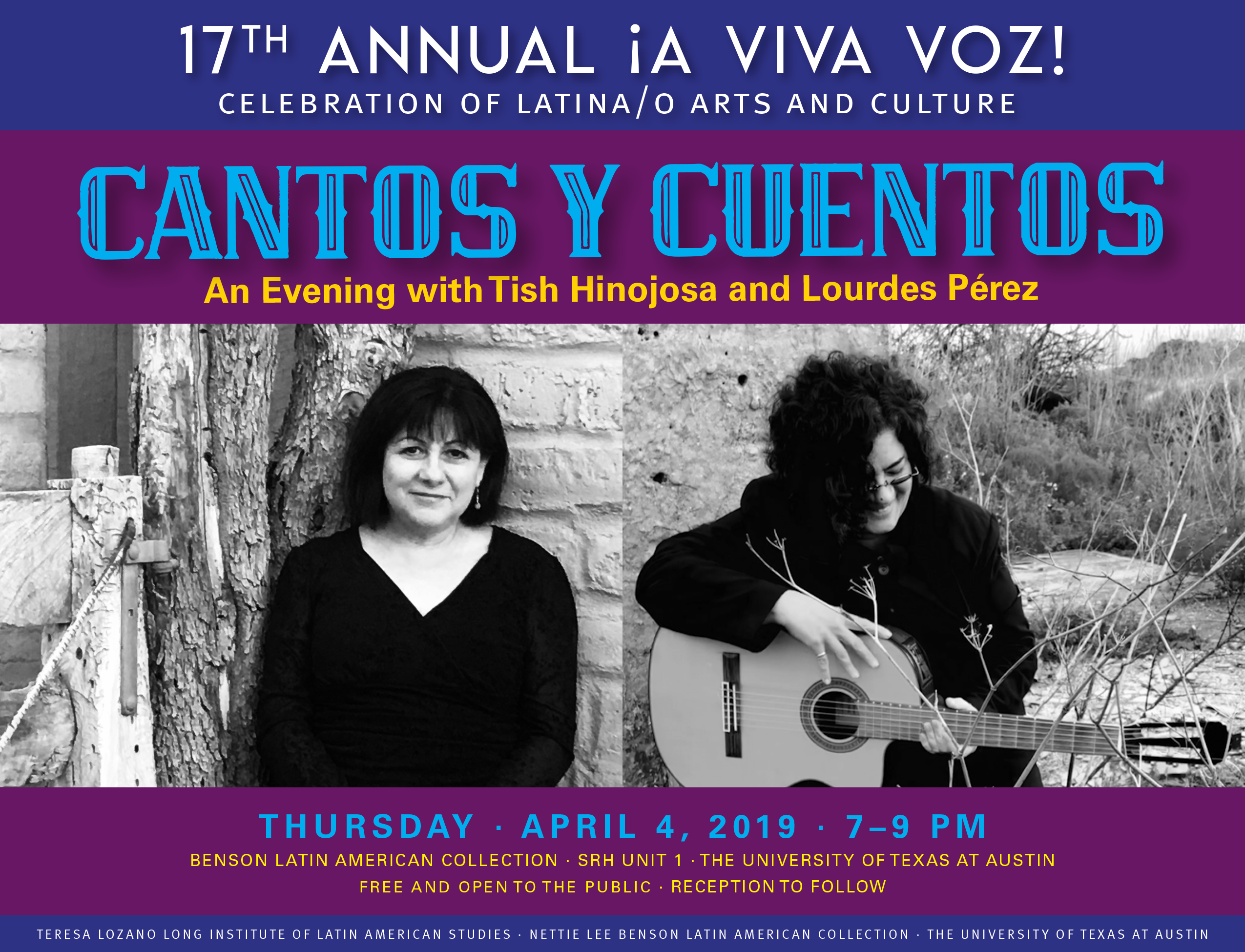 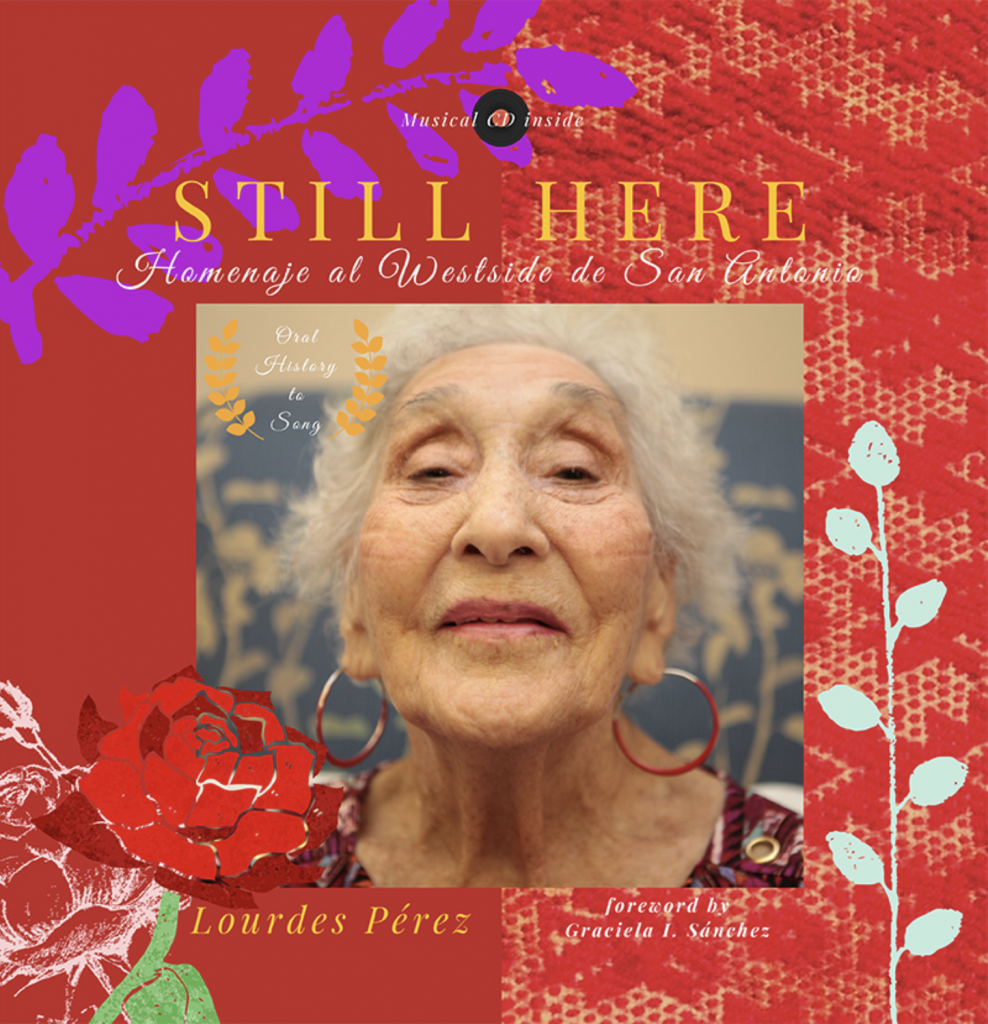 Born in 1948, much of Carmen Lomas Garza’s work reflects upon her formative years in Kingsville, Texas. Drawing on her experiences in a close-knit Mexican-American community, Garza’s work focuses on memories of everyday life with her family and her community.

In 2009, Garza was the featured artist for the Benson Latin American Collection’s annual ¡A Viva Voz! celebration of Latino culture where she talked about her life, her art and her influences — an event that was accompanied by an exhibition of 20 original serigraphs of her work.

Thanks in part to a generous donation by the Libraries’ own Linda Abbey and her husband Mark Hayward, the Benson was able to acquire those works of art in giclée, lithograph and serigraph form to join Lomas Garza’s archive as part of the permanent collections at the library.

For its tenth annual salute to Latino culture occurring this evening, “¡A Viva Voz!” aims to wake audiences up with a couple of artist provocateurs.

Nao Bustamante and Ricardo Domínguez create works that draw upon new media and information technology to inform and provoke dialogue on Latino cultural and political issues.

The performance artists will present their work at the Benson Latin American Collection in Sid Richardson Hall, from 7-9 p.m., tonight, Thursday, April 12. The event is free and open to the public.

Nao Bustamante’s work employs video installation, visual art, filmmaking and writing, but she is perhaps best known for her absorbing and sometimes outrageous performance art (such as faking her way onto The Joan Rivers Show as a “stunt exhibitionist” in 1992). Popularly known for her appearance in the Bravo Network television show “A Work of Art: The Next Great Artist,” she has also exhibited at the Institute of Contemporary Arts in London, the New York Museum of Modern Art, the Sundance Film Festival and the Kiasma Museum of Helsinki. She is currently an associate professor in the Department of Arts at Rensselaer Polytechnic Institute.

Ricardo Domínguez is a co-founder of the Electronic Disturbance Theater, a group who developed Virtual-Sit-In technologies in 1998 in solidarity with the Zapatista communities in Chiapas, Mexico. His recent projects include the Transborder Immigrant Tool, a GPS cellphone safety net tool for crossing the Mexico/U.S border and “Drones at Home,” an exhibition on drones, drone economies and art. Domínguez is also an associate professor in the Visual Arts Department at Univeristy of California-San Diego.

Avellán will discuss her work and rare position as a Latino woman in the traditionally male-dominated film business.

Charles Ramirez-Berg of the Department of Radio-Television-Film will make an introduction, and food will be provided by El Meson.

An exhibit of cinematic materials from Troublemaker Studios and Cine Las Americas as well as rare materials on the Golden Age of Mexican Cinema from the Benson’s extensive archival holdings will be on view at the Benson, as well.

Check out the trailer for Avellán’s latest production credit, just off its SXSW showing, Blacktino.

The Benson Latin American Collection is going to be “coconut rock” central next Thursday (4/8) when Austin-born psychedelic Afro-Latin funk band Ocote Soul Sounds throw down the beats as part of the eighth annual ¡A Viva Voz!

Featuring the bandleaders of Grupo Fantasma and Antibalas – Adrian Quesada and Martin Perna, respectively – Ocote Soul Sounds has been described as “sounding like a sun kissed Brazilian soundtrack from the ’70s.”

¡A Viva Voz! kicks off  at 7pm with a lite reception and presentation by dj t-kay of KOOP 91.7 fm before the band starts to jam and those so inclined shake it up on the dance floor.