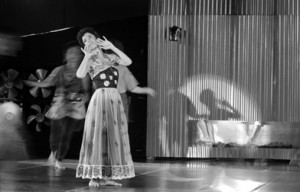 taken by Texas photographer Phyllis Liedeker Finley during Hay’s time in Austin will be on view in the FAL through April 8, when the Center for Women’s & Gender Studies will be hosting a symposium on Hay’s life and work.

The opening reception is co-hosted by the FAL and CWGS and takes place Friday, March 26 at 5pm. RSVP to Eve McQuade at emcquade@austin.utexas.edu or call 512-495-4363 if you’d like to attend.

Expect more event coverage in the coming weeks as we gear up for the David O. Nilsson Lecture (April 1, this Fifth Annual program features Robert Faires in an excerpted reprise of his fabulous one-man Henry V), the Benson‘s ¡A Viva Voz! (April 8, with Austin’s self-professed coconut rockers Ocote Soul Sounds), the Libraries’ contribution to Research Week, our annual Library Fair (April 14, PCL plaza), and a not-to-be-missed opening of photographs and ephemera from the world travels of Colonel L.B. Roberts donated by Friend of the Libraries Jan Roberts (May 7, FAL).