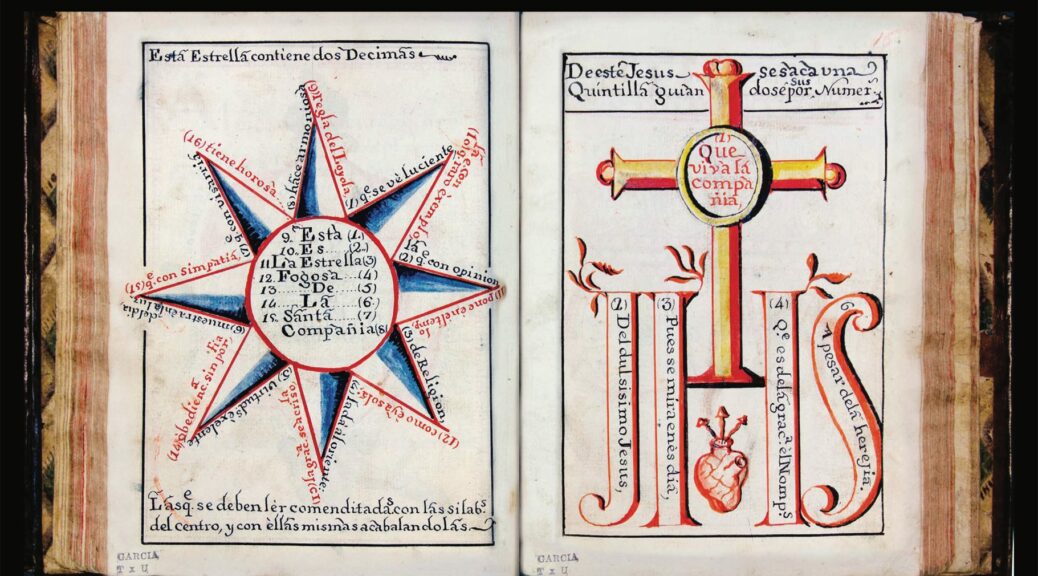 In anticipation of the centennial of the Nettie Lee Benson Latin American Collection in 2021, this issue features articles by faculty, students, scholars, and staff that highlight a wide array of collections in areas as diverse as art history, feminist theory, Black diaspora, Indigenous studies, Mexican film, and more. A special selection of Staff Picks surveys items in the collection chosen and written about by staff in short feature pieces. Truly, this issue has something for everyone, including information on how to support the Benson Centennial Endowment.

Diego Godoy, Inside the Agrasánchez Collection of Mexican Cinema—An entertaining and engaging look at a collection of historical Mexican cinema materials that will make you want to watch a bunch of these movies.

Matthew Butler and John Erard, The Hijuelas Books: Digitizing Indigenous Archives in Mexico—A history professor and a first-year student teamed up to write this article on what is being learned by digitizing important historical records in Michoacán, Mexico.

Julia Detchon, To and From the “Real” World: Concrete Art and Poetry in Latin America—This piece, by an Art and Art History PhD candidate, explores the Concrete art and poetry movement and its artistic and intellectual foundations.

Voices of Black Brazilian Feminism: Conversations with Rosana Paulino and Sueli Carneiro—Rosana Paulino is a visual artist and Black Brazilian feminist; Sueli Carneiro is an author and one of the foremost feminist intellectuals in Brazil. Both were keynote speakers at the February 2020 Lozano Long Conference on Black women’s intellectual contributions to the Americas. Interviewed here by UT faculty members Christen A. Smith (Anthropology, AADS, LLILAS, dir. of Center for Women’s and Gender Studies) and Lorraine Leu (LLILAS / Spanish & Portuguese).

Daniel Arbino, (Self)Love in the Time of COVID—Reflections from Benson head of special collections on themes of self-care and solitude in the Benson’s Latino zine collection.

David A. Bliss, Selections from the LADI Repository—Bliss, digital processing archivist at the Benson, highlights collections in the Latin American Digital Initiatives repository. These are vulnerable archival collections that are now available online due to Mellon grant–funded collaborations between LLILAS Benson and Latin American archival partners.

Brooke Womack, Catalina de Erauso o sea la monja de alferes, a 19th-century text on a 16th-century nun who was born a woman and obtained permission to dress as a man in the Spanish army.

Joshua G. Ortiz Baco, Arbol cronologico del descubrimiento de las Americas, 1864, on a map of the Americas in which the continent is depicted as a tree.

Albert A. Palacios, Student Activism in the Archives, 1969, 1970. Items from Texas and Uruguay are but two of the many examples of student activism in the Benson’s archives.

Susanna Sharpe, Camas para Sueños by Carmen Lomas Garza, 1985. The Benson is the repository for the archive of artist Carmen Lomas Garza, a native of Kingsville, Texas, whose highly popular and well-known artworks evoke many aspects of Chicano life and culture in the Rio Grande Valley and elsewhere.

Message from the Benson Collection Director A message from Melissa Guy