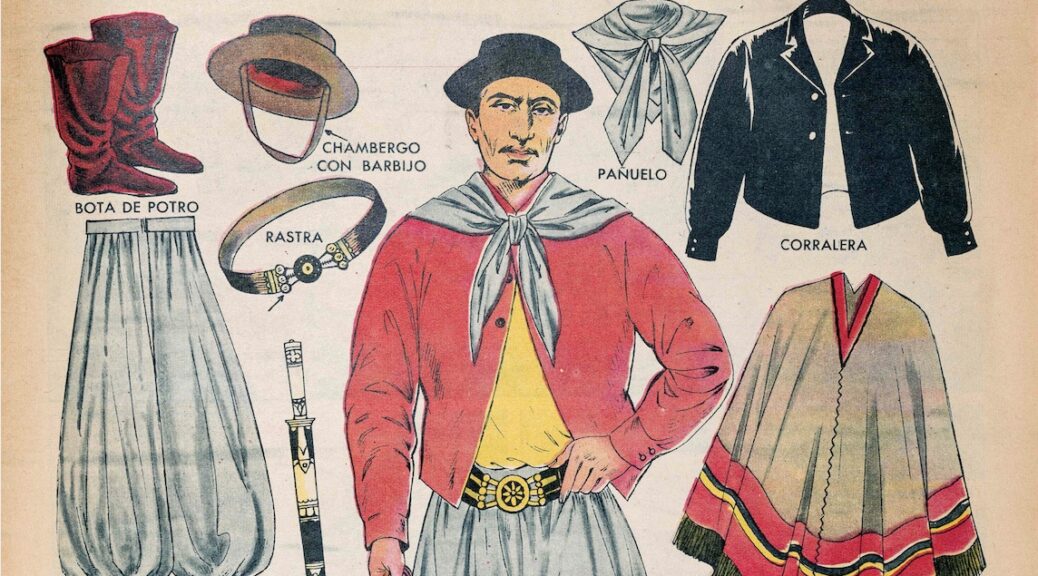 Related: Listen to “An Argentine Gaucho in Texas” on the Benson at 100 podcast. Escuchar este episodio en español.

JN: A big part of this collection came from two collections that the Benson purchased. One would be the Martínez Reales Gaucho library, purchased in 1961. That contained about 1500 books, pamphlets, and articles and literature of the Argentine cowboy, and more than 300 editions. The other one was the Simon Lucuix library, purchased in 1963. The collector had over 21,000 volumes on Uruguay and the Rio de la Plata area.

Why do you think Martín Fierro has remained so popular?

JN: The book was published nineteen years after the Argentine constitution of 1853. In that constitution, there was a government policy that encouraged European immigration as an effort to “clean ” races and also populate Argentina. The gaucho became a representation of this struggle of people who were feeling threatened and feeling the consequences of European immigration.

MA: [Martín Fierro] was not the only poem that was written in the voice of a gaucho, but one of the differences is that this one really makes the gaucho the hero in a sort of tragic tale. It was therefore taken up by different groups of people as a symbol of someone who stands for freedom, someone who was oppressed by the government, sort of a hero of the people.

It transitioned from mass popularity to being used by the literary elite to create a political national identity. And in that way, it got really inscribed into popular culture. There are images of a popular tango musician [Carlos Gardel] dressed as a gaucho. These two cultural products [tango and gauchos] are very, very different, but we can see as the gauchos diminished in number, they were used as a symbol of Argentine identity.

The exhibit focuses largely on the work’s legacy in Argentina. Can you talk about its influence outside of Argentina, such as in Brazil and Uruguay?

MA: Gauchos existed in the Rio de la Plata area, it wasn’t just these artificial borders—it spanned the entire region. A gaucho in Argentina was very similar to a gaucho in Uruguay.

One thing that I thought was interesting was that during the period when José Hernández was alive, there was a lot of political turmoil and he was exiled in Uruguay and Brazil; he started writing the poem in Brazil. There was this movement across these borders.

Who should visit this exhibition?

What was the most interesting thing you learned in the course of doing this project?

JN: For me, it was how heavily the government was involved in spreading the poem. When I found out that we had this poem was translated into over 70 languages, I had an idea that it was really popular internationally, but they were all published in Argentina. Something we’ve mentioned before is how it became so popular. I think it was really a true combination of both the mass public and the government. If either one wasn’t on board with this particular poem, I am not sure it would have been as popular as it was.

What is your favorite item in the exhibition?

MA: One of my favorite items is a version that was written for a juvenile audience that is annotated. I appreciated the annotations because there’s so much gaucho language in the poem that was part of what made it successful, but part of what makes it difficult to understand even if you’re a Spanish speaker. It is interesting, one, because you can see how the poem is taught to young Argentines, and two, it makes it understandable for us as readers.

We’ve talked a lot about how we chose to frame this and what we chose to focus on. All of it was driven by the holdings, but there are gaps. This is a very masculine, ideal image of this national identity. I would have loved to have more about who were the female subjects in the poem, how they were treated.

Do you think this experience will inform your careers in archives and libraries in any way? If so, how?

MA: For me, I think it definitely will. This was my first time creating an exhibition and I really had to think about how there are so many access points to materials in archives and rare books.

Previously, my work has been in providing reference, so I had to think about instruction in rare books and archives. How do I teach someone about these materials? How do I help tell a story? What kind of framing am I providing to this knowledge? That’s really one of the reasons that I chose this program and that I am interested in for my career—how is cultural knowledge framed by archives and museums, and what is it communicating to audiences?

JN: I agree. Creating an exhibit is so different from providing reference. It’s putting it out there and then hoping it conveys the messages that we want it to convey.

Also, it was my first [time] to put my experience of working in libraries and archives and my Latin American academic experience together. I do that when I do reference or processing, but putting an exhibition together is really thinking, what is my previous knowledge of Argentine history and politics? And what are my gaps, and how do I use my background to build on that?

Another point is working collaboratively. We were able to bring both of our different experiences to put this one project together. Librarianship is very collaborative work—that is what they teach us at the iSchool. Being able to put that on something that wasn’t just a class project was a great experience as well.

Melissa Aslo de la Torre is a master’s student at the School of Information at UT Austin (iSchool).

Janette Núñez is a dual-degree master’s student at LLILAS and the iSchool.