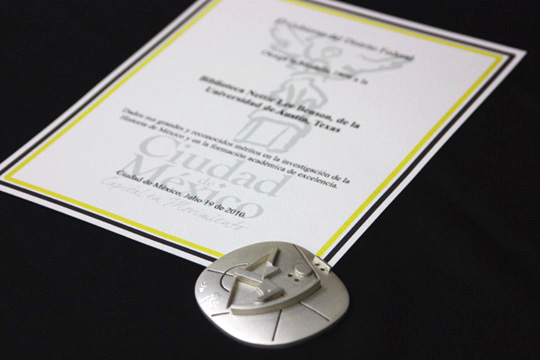 Our Vice Provost Dr. Fred Heath and Director for Development Gregory Perrin knew this would be a wonderful opportunity to invite our alumni from Mexico City, and the surrounding cities, to attend the ceremony. They decided it would also be quite advantageous to host a luncheon following. And this is where I came in. Part of the role I play in working for the Libraries is as an event coordinator. I love it because of the opportunities of excitement that abound, meeting new people and creating a delightful atmosphere for the libraries’ constituent; although, a first trip to the interior of Mexico and hosting a lunch would definitely be something extraordinary. END_OF_DOCUMENT_TOKEN_TO_BE_REPLACED

The Benson Latin American Collection just received notification that they have become the first institutional recipient of the Medalla 1808, an award presented on behalf of Mexico City to persons – and now institutions – for significant contributions to the study and development of Mexican history and culture.

The Benson joins a crowd of such renowned writers and historians as Carlos Fuentes, José Emilio Pacheco and Carlos Monsivais, and being amongst those names is surely a humbling experience.

Congratulations to the Benson for this much deserved acknowledgment.

More information can be found here.