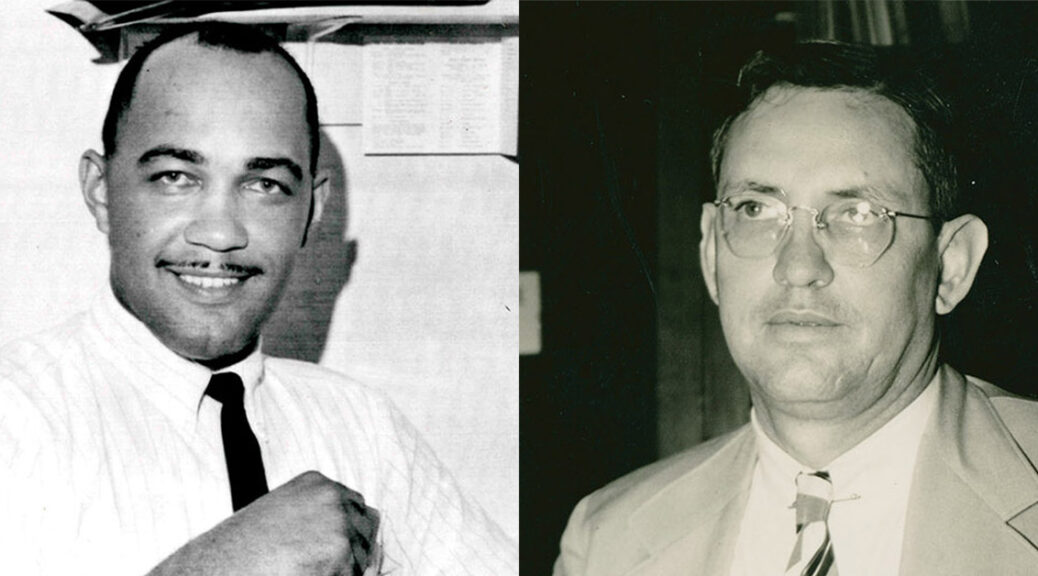 Ervin S. Perry, the first African American to be appointed to the academic rank of professor at the University of Texas at Austin, was an associate professor of civil engineering at the time of his death in 1970. He received the M.S. degree from the University of Texas at Austin in 1961 and the Ph.D. in civil engineering from the university in 1964, working in the areas of materials science and structural mechanics. Before his untimely death, Dr. Perry was a prominent figure in engineering. In 1970, he was named to receive the National Society of Professional Engineers’ first “Young Engineer of the Year Award.” He had been similarly honored at state and county levels by the Texas Society of Professional Engineers.

Ervin Perry was graduated from Prairie View A & M University in May 1956 with a B.S. in civil engineering and was commissioned a second lieutenant in the U.S. Army Corps of Engineers. After two years of military service, he taught at Southern University in Baton Rouge before deciding to pursue graduate work. He first came to the University of Texas at Austin in the summer of 1959 when he entered the graduate school to study civil engineering. He took a brief hiatus from his studies to serve on the engineering faculty at Prairie View A & M University. From the summer of 1960 until December of 1970, Ervin Perry was connected in some way with the university and brought distinction to himself and his institution.

He was awarded the M.S. in civil engineering in June 1961; he chose the title, Bond Stress Distribution in Concrete Beams and Eccentric Pullout Specimens, for his master’s thesis. Three years later in May 1964, Perry was awarded his Ph.D. His dissertation, A Study of Dynamically Loaded Composite Members, described his research in the areas of materials science and structural mechanics.

Ervin Sewell Perry was born on a farm in Coldspring, San Jacinto County, Texas, in 1935, a twin son of Willie and Edna Perry. He grew up with four sisters and a twin brother. The close-knit family was inspired by their father and schoolteacher mother to move toward higher education: all of the Perry children hold degrees from Prairie View A & M University, where their mother attended school.

Headlines over the state carried the news when Ervin S. Perry was named assistant professor of civil engineering in the Fall of 1964, the first African American ever appointed to this level of academic rank at the University of Texas at Austin. Widely sought by other top-ranked colleges, Perry elected to stay in Austin and to make noteworthy contributions to his own university.

Early in 1970 Dr. Perry became ill and went to M.D. Anderson Hospital in Houston for treatment. He resumed his teaching later in the year, but illness recurred that fall in Berlin, Germany, where he was representing the university at an international engineering conference, presenting papers based on his research on the basic properties of concrete. Ervin S. Perry died at the age of 34 in December 1970.

View the biography of Dr. Perry in the Handbook of Texas Online

Carlos E. Castañeda played a central role in the early development of the Benson Latin American Collection, which is considered one of the world’s foremost repositories of Latin American materials. He was a Phi Beta Kappa graduate of the University of Texas at Austin where he earned the B.A., M.A., and Ph.D. degrees. Dr. Castañeda was librarian of the Latin American Collection from 1927 until 1946 and is given principal credit for acquiring the incomparable private collection of Garcia Icazbalceta of Mexico. Recognized as an authority on the early history of Mexico and Texas, Dr. Castañeda served as a part-time associate professor of history from 1936 to 1946, when he was named professor of Latin American history, a position he continued until his death in 1958.

Carlos Castañeda was born in Camargo, Mexico, in 1896. He attended schools in Matamoros until the sixth grade when his family moved to Brownsville. He quickly learned English and was graduated with highest honors from Brownsville High School in 1916. Orphaned at the age of fourteen, young Carlos assumed the responsibility for himself and his four unmarried sisters. After graduation he taught in a school at Las Palmas.

Castañeda enrolled in the University in 1917 as a student of engineering and took a part-time job working for Dr. Eugene C. Barker in the History Department. This work with Dr. Barker led Castañeda to discover history and to change his major. He was graduated with an A.B. in history in 1921 and was elected to Phi Beta Kappa. After graduation he taught in the public schools of Beaumont and San Antonio before returning to the University of Texas at Austin to work on his M.A., which he completed in 1923. His master’s thesis was titled A Report on the Spanish Archives in San Antonio, Texas .

Carlos Castañeda was an associate professor of Spanish at the College of William and Mary from 1923 to 1927. He returned to the University of Texas at Austin and was named librarian of the Genaro García Collection, now the Benson Latin American Collection, in 1927. He retained this association while serving as associate professor of history from 1939 until 1946 and developed that collection into one of the most distinguished in the United States.

Castañeda was granted his Ph.D. from the University of Texas at Austin in 1932. His dissertation, Morfi’s History of Texas, is a critical edition from an original manuscript by Fr. Juan Augustin Morfi that Dr. Castañeda discovered within the archives of the convent of San Francisco el Grande in the National Library of Mexico. In 1946 he was named professor of Latin American history, a position he continued until his death in 1958.

View the biography of Dr. Castañeda in the Handbook of Texas Online