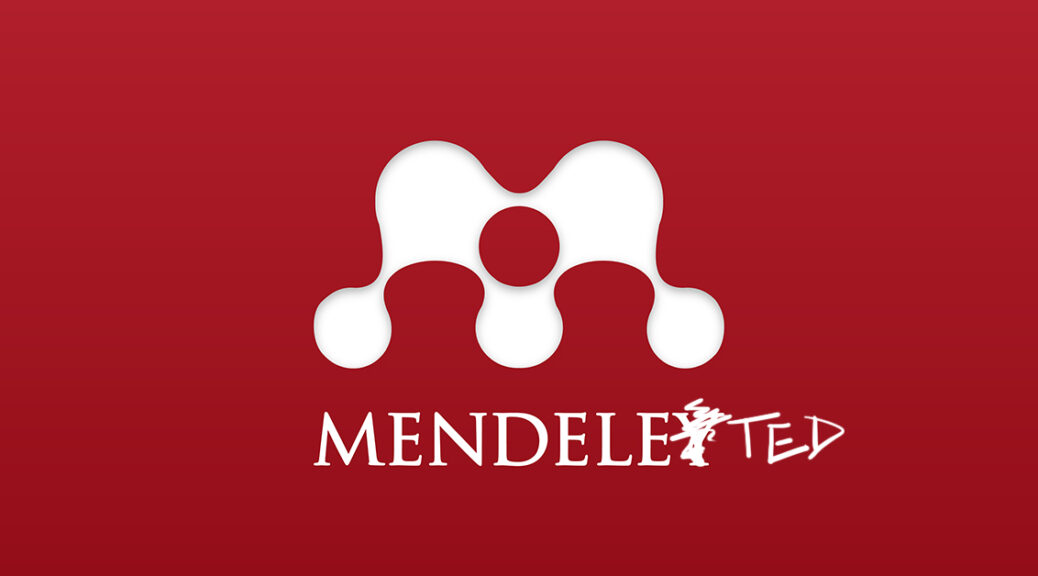 Dale J. Correa is the Middle Eastern Studies Librarian and History Coordinator for the UT Libraries, and she regularly teaches on research data/citation management for the humanities at The University of Texas at Austin.

Hannah Chapman Tripp serves as the Biosciences Librarian and has provided research help with a variety of citation management programs at The University of Texas at Austin and previous institutions.

Where Did My Data Go?

In Fall 2020, registered Mendeley users received a message via email titled “Improving Mendeley to Better Support Researchers,” regarding some intended updates to Mendeley’s service model. These changes included the removal of several Mendeley library features, including the Public Groups feature that allowed for large groups to share references and notes openly. These groups were particularly appealing to some scholars as they represented a method to share resources openly, publicly, and free of cost in both invited and open group settings (without a limit on membership to the group). Under the Public Groups umbrella, both the invite-only and the open groups were included in Mendeley’s feature-removal plans. Unfortunately, Mendeley’s email did not explicitly state the intention to delete the Public Groups from individual Mendeley users accounts with the coming update — which went into effect in March 2021, and meant that individual users found their locally-stored files from these groups deleted on their own machines.

Researchers who used this feature were somewhat unlikely to have encountered that email message or have read it through thoroughly. After all, many emails from services utilized by researchers contain information about updates, but much of it goes unread. And, of course, some email systems would automatically detect messages like this one as spam or junk, and so would send them directly to a folder that, unless checked, frequently goes unnoticed and unchecked.

As “announced,” Mendeley went ahead with the plan and began removing certain features, including Mendeley Feed, Mendeley Profiles and Mendeley Funding in December 2020. In March 2021, Mendeley began retiring Public Groups. It does not seem that there was further, specific communication regarding the Public Groups retirement in the lead-up to this change in March.

While we fully acknowledge the need for commercial companies to pivot priorities, continue development of what’s working and in some cases remove features that are less popular and see less return on investment, the awareness campaign for these changes clearly did not reach enough of the affected audience to warrant the deletion of features from an individual user’s Mendeley library. The failure of this important information to reach registered Mendeley users is evidenced by many, many, many reactions on Twitter from the scholarly community. While most scholars understand the need to make changes to a platform and continue to improve the services offered, they are also outraged at the lack of effective communication prior to deleting this feature.

Mendeley has acknowledged that there was not enough time or communication involved in this plan to remove features, and has since re-enabled the invite-only groups, a subset of the Public Groups, for a brief period of time so users can retrieve their data. It is a significant concern of many researchers that all of the content in the Open Groups (which was the other option under the Public Groups umbrella) is not going to be restored and that the data has been lost permanently. For many academics, this is a devastating realization, as years of research and references have been erased with deficient notice. Although Mendeley has apologized for the handling of these changes, the fact remains that some scholars — including those in the more vulnerable categories of PhD student, post-doc and non-tenured faculty — are left without vast quantities of their research.

While this is an unfortunate situation, we hope that some takeaways can be gained from the experience. For researchers, the importance of backups, knowing your product and an awareness of the fact that changes are quite likely, are a few of the points we hope to address.

Backing up research data is important, regardless of the type of data or original format. A best practice in data retention habits is the 3-2-1 rule, wherein three copies of research data are maintained, in two separate formats locally, and one copy offsite. Some researchers wrongly assumed that with Mendeley’s storage and syncing they were achieving at least a portion of this best practice; however, they learned in practice that when data is deleted from the Mendeley web version, that deletion can be synced down to any local copy of Mendeley connected to the web. In order to have the 3-2-1 rule appropriately in practice with Mendeley data, researchers must back up a copy of their data to an external hard drive location and an online cloud storage solution separate from Mendeley. What makes this situation trickier is that, starting in 2018, Mendeley began encrypting researchers’ local data folders, making it very difficult to access one’s own data when not using the Mendeley interface (although some researchers have identified workarounds to the encryption). What should be backed up, rather, is data exports from Mendeley in open file formats and PDFs, including notes, to ensure that researchers will be able to access, use, and rebuild their reference libraries if their Mendeley data itself becomes corrupt or a change in Mendeley services affects their access.

With RIS (Research Information Systems bibliographic citation file format) files and PDFs backed up to the local machine as well as to a back up option like UT’s Box, researchers would have the option to continue using Mendeley, or move their data to another citation management software such as Zotero or EndNote. For those who are continuing to use Mendeley, incorporating a backup system as described above is the recommended option for ensuring long term access to integral research references, notes, and files (particularly annotated PDFs).

It is also important to keep abreast of changes in the software. As librarians, we are just as guilty as the next person of not reading terms of use or new update details before initiating a download. We could all make a better effort to read through the software’s terms of use.

Mendeley — owned by a for-profit company — will continue to optimize the most attractive, state-of-the-art, and revenue-generating features and functionality in their product. This process inevitably means refocusing efforts and making tough decisions about what features to no longer support. However, the realities of software changes and obsolescence are not confined to Mendeley or, for that matter, to for-profit companies. For example, the backups you made decades ago to a floppy disk are likely no longer retrievable due to hardware changes and potential software obsolescence.

So, whether you have lost your data with this change in Mendeley services or you are one of the lucky ones who was not relying so heavily on the free Public Groups features, we strongly recommend that you use a sensible back up system; back up in open formats from which you can easily retrieve your data no matter what system you’re using; and keep an eye on the crucial changes that come with software updates. We are here to assist with data and citation management best practices — please see the Research Organization with Citation Managers LibGuide for more information.