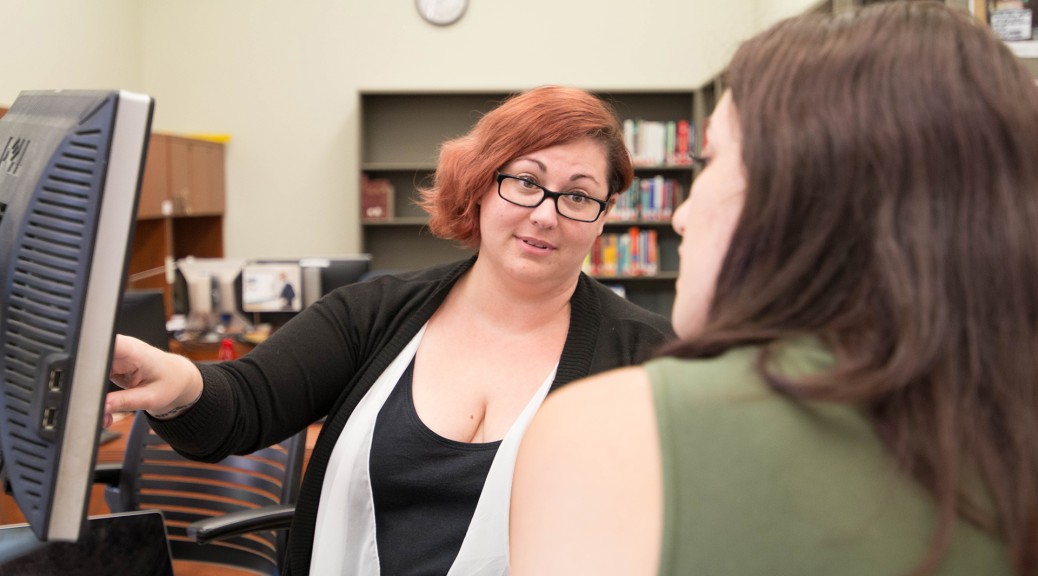 Liaison Librarian for Physical and Mathematical Sciences Lydia Fletcher is currently co-chairing the STEM Librarians South conference, which brings together information professionals and academics from across the Southern U.S. and beyond to share their ideas, current research, best practices, and unique insights that help librarians advance the cause of STEM education and research.

When not organizing conferences, Lydia provides research, teaching and publishing support for all students, faculty and staff in the departments of Physics, Mathematics, Astronomy, Statistics & Data Science, Computer Science and Electrical & Computer Engineering.

She graciously agreed to answer a few questions about her work and experience for us.

Where did you study?

LF: I did my BA at the University of Texas at San Antonio and did a Master of Studies degree at the University of Oxford in the UK. Both of those were in English, and it wasn’t until I started working in libraries and got my MSIS here at UT that I realized that I could work with scientists as a librarian. And that I love it!

When did you join the UT Libraries, and what drew you to Texas?

LF: My three year anniversary with the UT Libraries will be on August 15! Some days it feels like I just got here, and other days it feels like I’ve been here forever. Texas is home for me – I’m from San Antonio – and UT is an exciting place to work. I love getting to interact with the researchers here, especially the folks at McDonald Observatory.

Speaking of, you undertook a reorganization project for observatory a few years back. What did that entail, and what was the experience like?

LF: The folks out at McDonald Observatory wanted to make some improvements in the Otto Struve 82” Telescope (the original 1939 telescope) building ahead of their 80th anniversary this summer. The library collection had spilled out of the library into the hallways and they wanted me to help them clear those hallways. I got to spend a week at McDonald Observatory – which was amazing! – and at the end we identified materials to be brought back to Austin. I also helped them get former director Harlan Smith’s collection displayed more prominently and created a display collection of works by and about McDonald Observatory. It was a great collaboration and I’m very proud of how the library looks now.

What are your responsibilities?

LF: As a liaison librarian, I support students, faculty, and staff with their research needs in the departments I liaise with: Astronomy, Computer Science, Electrical & Computer Engineering, Mathematics, Physics, and Statistics & Data Science. At the moment that looks like working with faculty to make sure they understand some new National Science Foundation Open Access mandates, but it also includes a range of reference and scholarly communications support.

What aspect of your job is the most fulfilling?

LF: Solving puzzles for people. Sometimes I get reference questions where someone has an incomplete or incorrect citation, and I really love figuring those out. Or looking for a translation – recently someone wanted a translation of an article written in the Soviet Union in the 40s. I tracked a translation of it down to a microfilm held by the British Library and was able to scan a copy for the researcher. That was fun!

Your studies were in the humanities, but you’re immersed in science now. What are the differences you see in the discipline-specific approaches to research and general library use by STEM and humanities folks, and do you recognize any differences in styles within the departments you liaise with?

LF: Scientists are so different from people who do research in the humanities. Scientists use different materials from those in the humanities – most scientists rely on journals instead of books, but they also need things like datasets and specialty software. So, most of the students from those areas look to the libraries for computers where they can access all those things. I love that the Libraries IT staff do such a great job making sure we provide software like Mathematica and LaTeX. Of course, there are outliers even among scientists – Math researchers tend to be different from other scientists, and actually more like humanities researchers in that they love books!

What do you think the prospects are for wider adoption of open access practices by STEM faculty and researchers?

LF: It’s a little funny for me to talk about Open Access adoption because the departments I work most closely with – Physics, Math and Astronomy – are already committed to not just Open Access publishing but Open Science principles like data sharing. It’s almost universal to see Physicists and Astronomers making versions of their articles available as preprints, and most Astronomical data is publicly available. But they’ve been doing it for a long time already – the Arxiv preprint server was developed by Physicists in the early 1990s. I definitely think other disciplines will adopt open practices, but it will take some time. It doesn’t happen overnight. We just have to keep working on sustainable models and promoting them.

What are you reading this summer?

LF: I just finished “American Moonshot: John F. Kennedy and the Great Space Race,” since I’m so excited about the 50th anniversary of the Apollo 11 moon landing.

Still want to travel to space? Mars mission perhaps? Or the Space Force?

LF: If anyone at NASA or SpaceX is reading this and looking for a librarian to go to Mars, they can definitely call me.