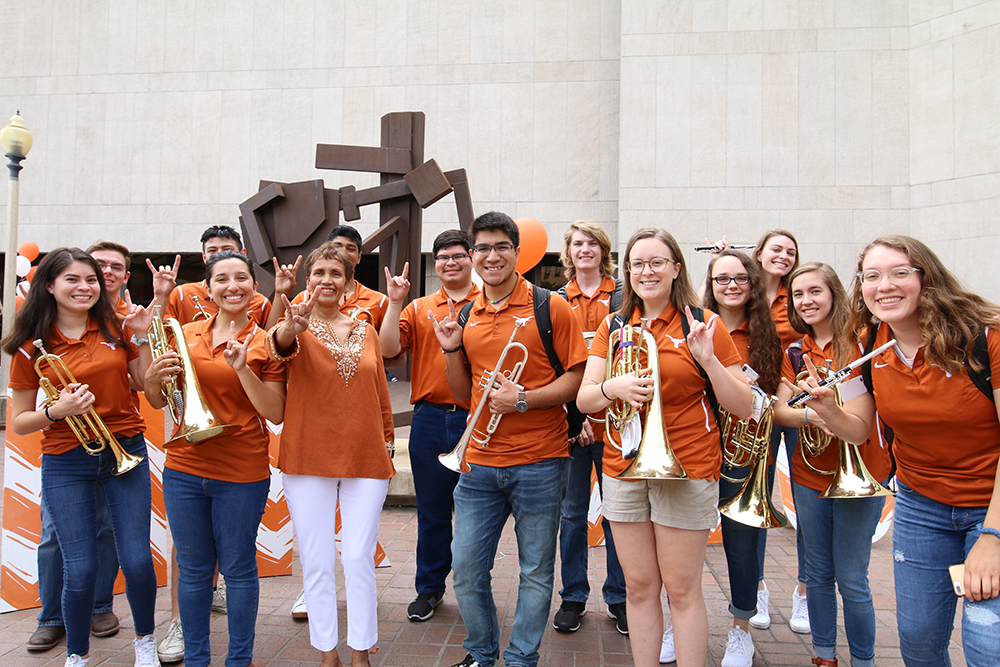 Maybe it’s the shorter days, but the fall semester seemed to fly by. Despite the fact that an entire term goes by in a blink, progress doesn’t stall here at the Libraries.

The start of the semester was heavily influenced by milestones related to the Benson Latin American Collection. The Benson got its own book in early August (published by UT Press) documenting the institution’s storied collections and history, and ended the month with “An Evening of Discovery,” an event to launch a fundraising campaign for the Benson’s 100th anniversary (in 2021) featuring noted journalist Enrique Acevedo (Univision, Fusion) speaking on  the currency of Latin American culture, with additional remarks by former UT President Larry Faulkner and Dr. Adriana Pacheco Roldán. The event generated almost $100,000 for the Dr. Fernando Macías and Dr. Adriana Pacheco Benson Centennial Endowment.

The Libraries welcomed the first class of The Consuelo Artaza and Dr. Carlos Castañeda Diversity Alliance Residency Program for the inaugural 2-year term. Laura Tadena and Natalie Hill quickly acclimated to the new program, interviewing staff and getting a lay of the land; their perspective should offer a valuable contribution to the Libraries going forward.

The Libraries hosted its annual tailgate in early September for the Longhorn victory over Tulsa with a family-friendly recharge space that hosted over 300 visitors. Special thanks to partners at the Blanton Museum of Art, Center for Mexican American Studies and LLILAS Benson, and supporters Austin’s Pizza, Austin Eastciders, Dripping Springs Vodka, KIND, Republic Tequila and Tito’s Handmade Vodka.

The Benson welcomed Edmund W. Gordon, the renowned psychologist, professor, researcher and expert in education access for historically disadvantaged populations, for the opening of his archive and an exhibit on his career and contributions. The event — “Life, Leadership, and Learning: From the Archive of Edmund W. Gordon” — was hosted by Black Diaspora Archivist Rachel Winston with friends, family and students present for testimonials of Gordon’s impact and a moving speech by Gordon himself.

A couple of open house events later in the month served to launch space enhancements promised to our patrons in the previous year. The first, at the Fine Arts Library, made good on a commitment to improve the research experience for users in the College of Fine Arts with an array of changes to the location’s fifth floor. A collections area was cleared to make room for additional stacks space to accommodate additional books, and along with furniture and aesthetic upgrades, the underperforming wifi was brought up to standards. Provost Maurie McInnis joined appreciative members of the CoFA community and representatives from the Libraries to christen the space in early October.

A second opening — also presented with the help of Provost McInnis — highlighted the expansion of the PCL’s most popular community study area. The Collaborative Commons on the library’s 5th floor doubled in size to provide students with a vast improvement over the anachronism they’d been thus subjected to: new modular furniture, carpet and color schemes from this century and enough outlets to accommodate backpacks full of personal devices.

In mid-October, Provost McInnis announced the Task Force on the Future of the UT Libraries, a strategic outcome of campus dialogue which had been in development since last spring. The task force will collect input and hold ongoing conversations with stakeholders in order to develop a shared vision for the future of libraries on the Forty Acres. The launch of the task force was followed shortly by a town hall featuring the co-chairs Dean Michelle Addington of the School of Architecture and Vice Provost and Director of UT Libraries Lorraine J. Haricombe, along with guests James Hilton, University Librarian and Dean of Libraries at the University of Michigan, and Anne Kenney, former University Librarian at Cornell University and consultant to the task force.

And in November, the Libraries paid tribute to the legacy of former director Harold Billings in the form of an exhibit detailing his career work in bringing the institution into the digital age. An intimate reception was hosted for family and friends, and graduate research assistants Virginia Barnes and Rachael Zipperer (School of Information) discussed their experience in developing the exhibit and it’s accompanying online timeline, “The Tomorrow Librarian: Harold Billings’s Legacy, 1978-2003.”

Now we take a much-deserved break to recuperate for the next semester of work, and hope you’ll do the same. Best wishes for your holidays from the University of Texas Libraries!