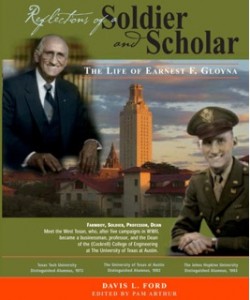 Earnest has had an amazing career as an educator and researcher, as a consultant working on environmental problems all over the world, and as a dean. Under his leadership the College of Engineering grew enormously and improved its graduate programs by hiring highly qualified faculty from all over the United States. This faculty would help make the Cockrell School a research powerhouse.  Another of his great accomplishments was when he helped the Engineering Library grow from a barely competent collection to one of the best in the US.

I agree with the author, Davis Ford, when he says “the first time I met Dr. Gloyna I remember that he was very intimidating.  He was formal in his manner and physically large.” I first met Earnest when I interviewed for the job of Engineering Librarian in 1978 and he was large both physically and mentally. He asked me what I would do to make the Engineering Library one of the best in the country because Earnest believed then and now that information access is the key to any advancement in science and technology. I said “I’d do my utmost and I hope to count on your support.” As I grew to know him better I began to judge meetings by whether it was a two hug or three hug meeting—so it turns out he’s not really that intimidating. I’ve always ended every meeting by saying to Earnest “you’re my favorite dean” and his laughing response was and is “that’s because I gave you money.” This is true but it’s not the whole story.

Earnest gave the library the best gift anyone can ever give a library—endowments. Earnest is a hands-on man—he personally persuaded Richard W. McKinney to fund a library endowment that carries his name and the library is now named for him. Earnest also used his influence to get library endowment funded by various companies. But best of all he includes the Library’s importance in his book!

I enjoyed reading about Earnest’s early life, his World War II experiences as a Captain during D-Day, his graduate school times and his history of the College during his tenure. The vast number historical pictures are wonderful. There is nothing better for a librarian than to have a book written about a colleague that is interesting, enlightening and relevant to the librarian’s professional life.

“Hook ‘em” as Earnest would say.

Susan Ardis is Head Librarian at the McKinney Engineering Library at The University of Texas at Austin.