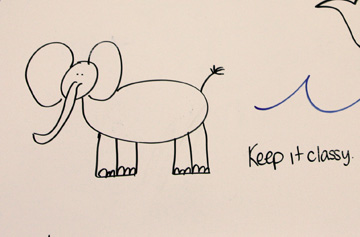 The end of the school year can be a liberating time for much of the population of the university. Most students get an extended break from the rigors of learning, or they complete a successful college career and move on to the next phase of life. Faculty transition from honing lectures and grading papers to scholarly or research pursuits, or just take some time to recuperate from teaching consecutive semesters. And for staff it generally means shorter lines, less traffic and time to catch up on all the projects that went on the back burner during the school year.

This nascent liberation can sometimes spur creative bursts as there are the beginnings of a collective exhale across the campus. Being on the front lines as we are when the library becomes a strategic center for student end-of-year projects and finals, we sometimes get the opportunity to witness, or even document, this extraordinary behavior.

The Perry-Castañeda Library has a number of group study rooms that are heavily used throughout the final weeks of each semester. Facing long nights and early mornings of intense work in preparation for finals, students have a tendency to blow off steam in fits of visual and rhetorical creativity on the whiteboards that populate these areas. One of our facilities staff, Frank Meaker, has, in the course of his work, been documenting some of the more original examples of this phenomenon. Last week, we took the time to upload these to the Libraries Flickr page in order to share them with interested viewers and armchair psychologists alike.

Also late last week, Middle Eastern Studies Librarian Robin Dougherty alertly captured one of her patrons in a symbolic act as she quite literally paraded the volumes she had been using in preparation for her comps at the Department of History back to the PCL in an extemporaneous ritual of completion for another hard-won term.

Forgive our conceit, but we choose to regard such displays as evidence that the library is considered by our patrons to be a creative sanctuary central to the biannual denouement of academic life on campus. And we are honored.