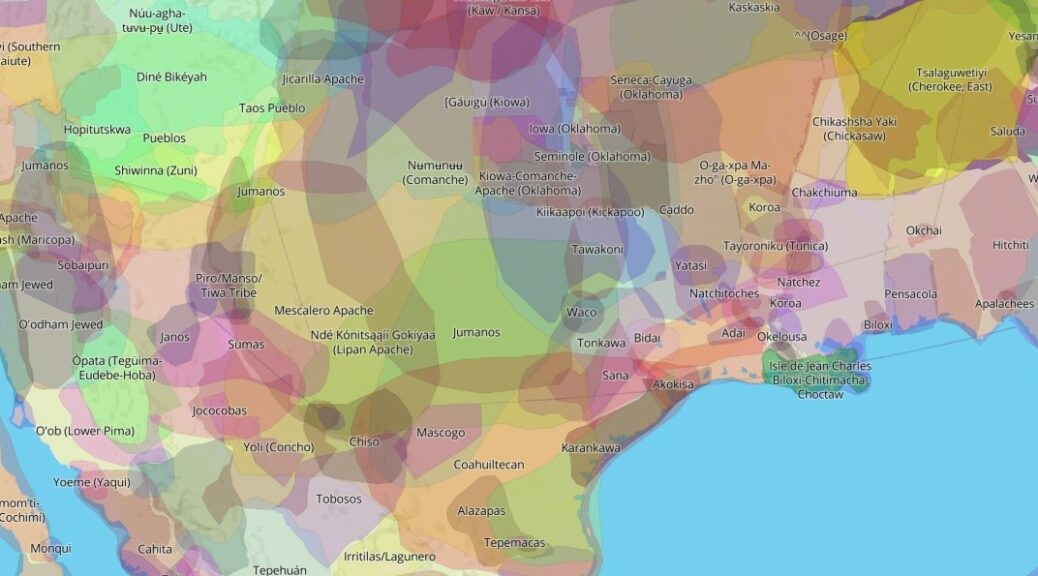 “Join us as we Defend the Sacred” is the first thing you see when you visit the Tāp Pīlam Coahuiltecan Nation website. They are defending remains found under and around the Alamo in Yanaguana, commonly known as San Antonio, Texas. Despite being born and raised there, I did not learn about the Tāp Pīlam “People of this Earth” Nation growing up in San Antonio. Rather, I found out about them on Native Lands Digital, an ongoing project that puts those left off the map through colonization back on the map.

Native Land Digital is an interactive map of Indigenous territories, languages, and treaties that documents native lands across the globe but particularly in North & South America and in Australia. It is available on the web or as a smartphone app (iOS and Android). The app uses basic geolocation to retrieve information from the website.

The initial map, Native-Land.ca, was created in 2015 by Victor Temprano, a settler hailing from Okanagan territory in what most call Canada. Temprano writes that he began Native Land in late 2014 as a hobby project after attending pipeline protests and looking more into the traditional territories of different nations in relation to resource development. Cognizant of being a settler, Temprano reached out to the community of users for input and corrections to the map. Since, Native Land Digital has evolved into an Indigenous-led, not-for-profit organization that “strives to go beyond old ways of talking about Indigenous people and to develop a platform where Indigenous communities can represent themselves and their histories on their own terms.”

Before you are taken to the Native Land map, a pop-up disclaimer encourages further investigation and corrections. Once you click “Go To Map,” it loads without the clutter of borders and the labels we are used to seeing on political maps. Instead, layers of colorful polygons represent Indigenous territories over a basemap that emphasizes terrain. Type an address, zip code, or placename, and the map will show both present and historical Nations in the area. For example, type the address for the Perry‑Castañeda Library (PCL). You won’t see the unmistakable shape of the building with the labels you are accustomed to until you click the buttons on the bottom right-hand side of the map marked “Colors” and “Settler Labels.” The map shows that the PCL is on Jumanos, Tonkawa, Ndé Kónitsąąíí Gokíyaa (Lipan Apache), Coahuiltecan, and Nʉmʉnʉʉ Sookobitʉ (Comanche) land.

You can toggle or search territories, languages, and treaties on the left-hand side of the map. Also, there is an option to “Contact local nations to verify” with links to web pages for each Nation. You will find links to Nation’s website, related maps, images, sources, a changelog, and a form to share thoughts and corrections. This openness to improvements and amendments has led to many enhancements to the project and built a community of scholars and activists invested in the project. A former member of the Board of Directors began her relationship with the project by submitting a boundary correction, for example.

Native Land Digital goes beyond the map, territory, and treaty pages. Following a link that encourages you to “think critically about this map” takes you to the Teacher’s Guide page with a downloadable guide titled “The Land You Live On” and a Historical Primer written by Shauna Johnson, a member of the Board of Directors. The teaching guide introduces the project, explains how to use both the website and mobile application, introduces the concept of “Land as Pedagogy,” and provides exercises to engage students of all ages, including those that are intended for use outside the classroom. The Historical Primer is a concise essay that skillfully explains why this work is so important, namely colonization and the erasure of indigenous people and their relationship to land.

Native Lands Digital is updated daily using a combination of technologies. WordPress, an open-source platform for self-publishing, is used to update map data, media, and links for each individual nation, language, or treaty page. Geospatial updates are then pushed to Mapbox, a tool for creating custom online maps, to update the map and associated API. Native Lands Digital API are free of copyright (CCO 1.0). Learn more about Native Land APIs from their blog post, Our Wonderful, Wily API.

Further reading about counter-cartographies, decolonizing the map, and Land as Pedagogy from these resources: