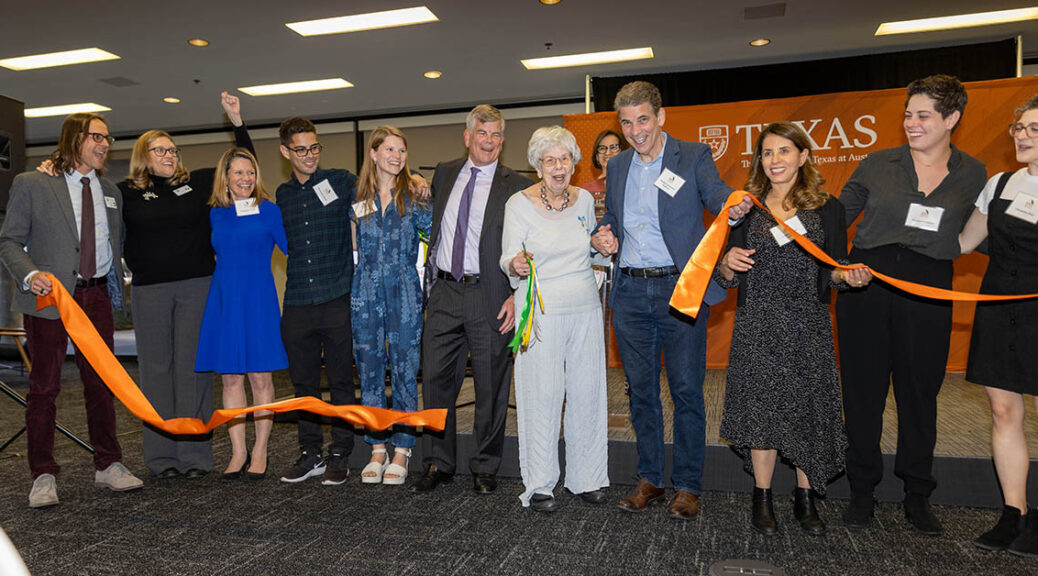 The Benson Latin American Collection dressed up and campus lit up for the opening of the newly-named Ann Hartness Reading Room.

On Thursday, March 24, the Benson hosted a dedication ceremony for the renovated space in recognition of former head librarian Ann Hartness, who is renowned for her 38-year career at the Benson and her contributions to Brazilian studies. The space naming is the result of a generous gift by Hartness’s son Jonathan Graham and daughter-in-law and Elizabeth Ulmer, who are both graduates of UT’s School of Law,

The couple is directing a portion of their gift to establish the Jonathan Graham and Elizabeth Ulmer Fund for Library Materials on Brazil, an endowment to enhance the Benson’s Brazilian studies collection. The remainder of their gift will match other donors’ gifts to new or established endowments in any area at the Benson.

“My mother raised three boys in two different countries, moving back and forth while balancing her family, her education and her work,” says, Graham. “I’m just so proud of her, because when I think of the arc of her life, at a time when women from her background essentially followed their husbands, she made her own very distinctive career.”

The reopening of the Hartness Reading Room extends the Centennial Celebration of the Benson, which began last year. In honor of the Benson centenary and the occasion of the reopening, the UT Tower was lighted orange.

Hartness joined the Benson in 1970, working as a cataloger of Latin American periodicals. She helped with the transition as libraries moved towards digital services and resources, and eventually worked her way up to director. Throughout her tenure, she increased the depth and breadth of the library’s holdings in Brazilian materials. She retired in 2008 at age 73.

“Ann Hartness is synonymous with Brazilian collections at the Benson,” says Benson Director Melissa Guy. “It was through her tenacity, in-depth knowledge, and personal relationships that the library built a strong foundation for the study of Brazil at The University of Texas at Austin.”

The Benson’s main reading room is frequented by students, faculty and scholars from around the world, and it is the very room where Jon Graham spent countless hours studying as a teen and later as a Texas Law student.

“It was a refuge to study in one of the graduate student carrels in the Benson Collection. It was a quiet place to read, wander and collect my thoughts. This is a perfect way to honor my mother,” he says.

To learn more about the Jonathan Graham and Elizabeth Ulmer Fund for Library Materials on Brazil and other giving opportunities at the Benson Latin American Collection, contact Hannah Roberts at h.roberts@austin.utexas.edu.