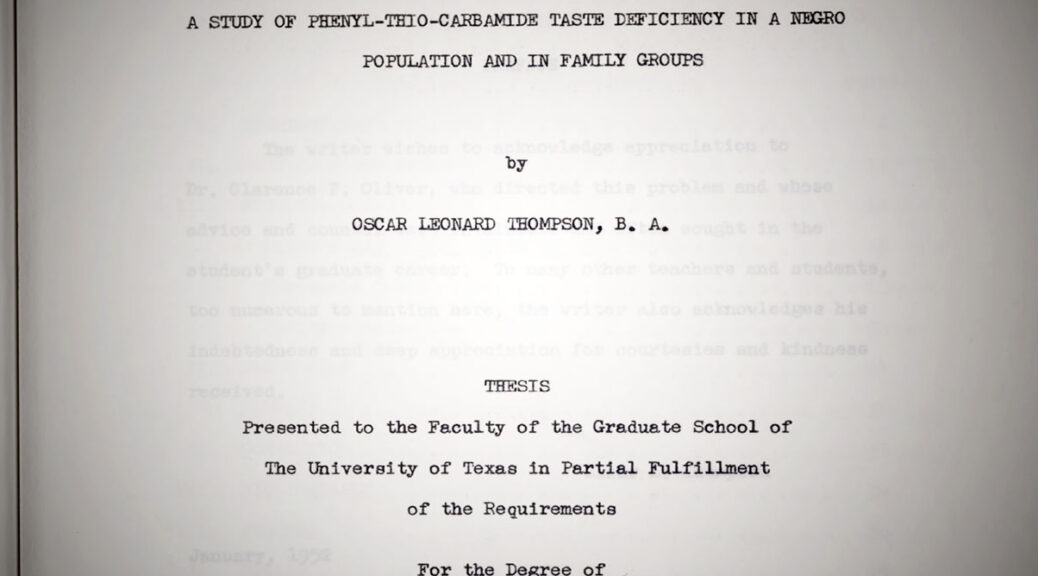 Though Heman Sweatt is the historical figure most associated with integration at The University of Texas at Austin, the first Black graduate to benefit from Sweatt’s efforts is getting a notable space in the university’s digital repository.

Thanks to a heads up from John Wallingford, professor in Molecular Biosciences, the thesis of Oscar Leonard Thompson is now available online.

After the Sweatt v. Painter decision effectively integrated UT, Thompson came to the university in September 1950 to pursue a master’s degree in zoology, with an emphasis on genetics. He was 45 when he became the university’s first black graduate, and became a research scientist at the Human Genetic Foundation assisting UT geneticist C.P. Oliver investigate sickle cell anemia.

A mere four months after Thompson graduated, John Chase – who has previously been mistakenly identified as the university’s first black graduate – earned his Master’s of Architecture.

In 1956, UT admitted its first black undergraduates, of which there were about 75.

Thompson died in 1962 at 55, when he was working on his Ph.D. and teaching at Tillotson College in Austin. UT flew its flags at half-mast.

In a bit of irony, Thompson’s wife Irene – whom he met through his research and who typed his thesis for him – lived in a house designed by John Chase in East Austin.

Thompson’s thesis – “A study of phenyl-thio-carbamide taste deficiency in a Negro population and in family groups” – is now available online through Texas Scholar Works.