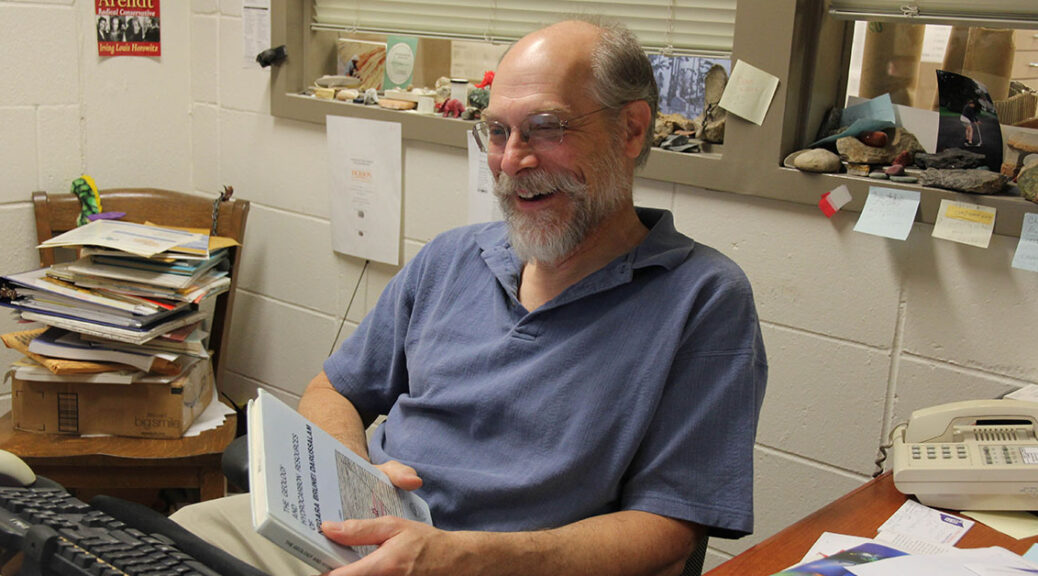 His 35-year tenure as the fifth Geology Librarian at the university is remembered as a period of prosperity for the library and the Jackson School of Geosciences, and Trombatore’s contribution to those successes are recognized by faculty, researchers, students and colleagues alike.

“Dennis was not just our librarian, he was the scout,” says Mark Cloos, Getty Oil Company Centennial Chair in Geological Sciences. “In more than a few cases, he found resources for areas I’ve been interested in, which I probably wouldn’t have found on my own for months, if not years, and in some cases, probably never.”

“He contributed to every student that I’ve ever had, and he contributed to me personally, ” continues Cloos. “We had the good fortune that he worked in the library at the University of Texas for 35 years. That’s more than a third of a century that he enriched the entire scientific enterprise here.”

Born in Fort Hood and raised in Baton Rouge, Trombatore joined the Libraries in 1985 after receiving his B.A. (’75) and MLS (’77) from Louisiana State University and working in librarian positions at Loyola University and The University of Georgia at Athens. Trombatore’s lengthy career equaled in duration that of the university’s storied original Geology Librarian Thelma Lynn Guion, and spanned a transformational period for libraries which witnessed the advent of the internet and the proliferation of digital resources.

His energies extended to professional pursuits that related to his role at the Libraries, as well, with numerous publications, reviews, field activities, committee participation, teaching and serving as a goodwill ambassador to visiting researchers, alumni and UT students alike.

“Dennis was more than a librarian,” says Vice Provost and UT Libraries Director Lorraine Haricombe. “He was a geologist in his own right, an explorer whose constant focus was on digging for resources – information, relationships and funding included – to build a library that would secure the university a leader in the field of geosciences. He was a librarian extraordinaire and will be sorely missed as a member of the Libraries’ family.”

Former Dean of the Jackson School of Geosciences Dr. Sharon Mosher announced last December the creation of a new endowment fund honoring Trombatore’s contributions to the college and the university.

“He carefully amassed invaluable collections, developed state-of-the art services and built a sense of community for the Jackson School family,” said Mosher. “Dennis Trombatore’s tireless efforts touched the lives of every student, research scientist, faculty, and staff member who had the pleasure of knowing him. The Jackson School wouldn’t be what it is without Dennis’s commendable efforts, for which I am profoundly thankful.”

In lieu of flowers, memorial donations can be directed to The Dennis Trombatore Excellence Fund for the Walter Geology Library or to the Penland School of Crafts in North Carolina.