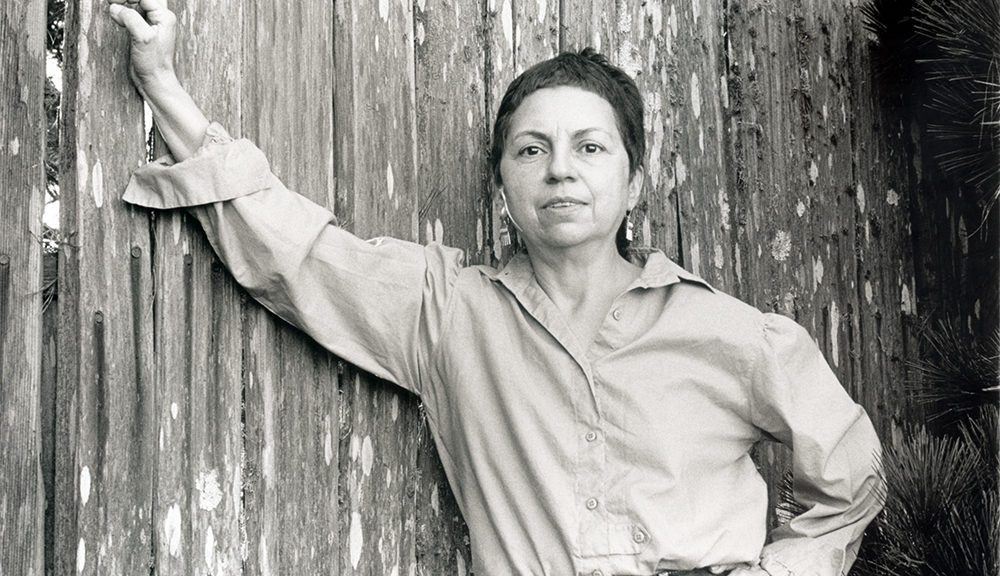 “I am a Libra (Virgo cusp) with VI — The Lovers destiny”: Celebrating the Birth and Life of Gloria Anzaldúa by Julia Davila Coppedge

Seventy-seven years ago, on September 26th, Gloria Evangelina Anzaldúa was born to migrant farmers Urbano and Amalia Anzaldúa in Raymondville, Texas. As the oldest of four, she helped work on ranches and farms to help support her family. It was during this time in the Valley that she first learned about discrimination against Mexican Americans. Anzaldúa would later leave South Texas, living in other parts of the state, and in Indiana and California. She would also spend a large part of her career traveling internationally. But, her experiences growing up in the borderlands would influence her writing for the rest of her career, as she alludes to, when states that “I am a turtle, wherever I go I carry ‘home’ on my back.”

Anzaldúa died on May 15, 2004 due to Diabetes-related complications. It is fitting we celebrate Anzaldúa’s life in the middle of Hispanic Heritage Month, which is observed September 15th – October 15th.

Her Time at UT Austin

Anzaldúa received her master’s degree in English and Education in 1972 at UT and returned in 1974 to pursue a PhD in Literature. In the foreword to the third edition of This Bridge Called My Back: Writings By Radical Women of Color, she reflected on her stuggles at UT: “As a Chicana, I felt invisible, alienated from the gringo university and dissatisfied with both el movimiento Chicano and the feminist movement…I rebelled, using my writing to work through my frustrations and make sense of my experiences.”

While at UT Austin, Anzaldúa also taught a class called “La Mujer Chicana.” During this time she struggled to find materials that reflected the experiences of her students, which drove her to edit the anthology.

Borderlands is a semi-autobiographical collection of poems and essays which draw on Anzaldúa’s experience as a Chicana and lesbian activist. The text is characterized by its sophisticated use of code-switching, “exploring Latinx and Chicana identity while also furthering an artistic vision.” Norma Élia Cantú and Aída Hurtado said in the introduction to the fourth edition:

“When Borderlands was published there was hardly a public discourse addressing multiculturalism. Anzaldúa’s persistent mixing of cultures, languages, and even writing genres, as exemplified in the structure and content of Borderlands, was blasphemous. The ‘cultural wars’ were in full force inside and outside the academy. The 1980s and early 1990s was an era of the mainstream academics fighting to preserve the Western canon and of political mobilization by conservatives to add an amendment to the Constitution establishing English as the official language of the United States…. Under these historical conditions the publication of Borderlands was an act of courage was well as innovative intervention to continue advocating for cultural diversity, the inclusion of sexuality in all academic and political production, and a call to social justice based on inclusion rather than exclusion.”

In January 2012, twenty-five years after it was published, Borderlands was banned in the Tucson Unified School System in Arizona, as a part of a law banning Mexican American Studies in public schools. Pérez and Cantú said the ban “affirms the value of the work even as it attempts to deny it.” This policy was lifted in 2017 after a federal judge in Arizona ruled it unconstitutional.

Borderlands was translated into Italian in 2000 and Spanish in 2015, and a French translation of the book is currently underway. Anzaldúa’s original manuscripts and other written notes and materials for Borderlands can be found in Boxes 32 – 38 of the Gloria Evangelina Anzaldúa Papers collection at the Nettie Lee Benson Latin American Collection.

In 2001, just three years before she died,  Anzaldúa reflected on the work of feminists of color in the foreword to the third edition of This Bridge Called My Back, saying “Yes, collectively we’ve gone far.” She continued, “But we’ve lost ground–affirmative action has been repealed, the borders have been closed, racism has taken new forms and it’s as pervasive as it was twenty-one years ago.” Eighteen years later the fight of People of Color, the LGBTQIA+ community, and working class people continues.

Emma Pérez says of Anzaldua’s work, “Long after the end of this century, her philosophy will endure. Gloria was an unassuming philosopher-poet whose words will inspire generations. She articulated our past to make sense of our present…She looked to the past to excavate hope for the future.”

This hope is reflected in Gloria Anzaldúa’s words, which inspire us today and are a testament to her lasting impact and legacy:

“This land was Mexican once,

And will be again.”

“The Benson Collection is also composing a complete bibliographic list of Anzaldúa’s personal library of more than 5000 books. This is an ongoing project, and interested researchers should contact the rare books reading room for this information.”

“Inez Hernandez Tovar and Gloria Anzaldúa discuss the political context and cultural work of Chicana writers. They explain that the Chicano movement provided some Chicano and Chicana writers the support and forums necessary to share their work. While mainstream publishing presses ignored minority voices, Chicanos and other groups were creating their own journals. These journals helped legitimate bilingualism among Chicanos as a vehicle of Chicano expression. Chicanas and Chicanos felt free to publish works written in a mixture of Spanish and English that reflected the language(s) they felt most comfortable in.”

This Bridge Called My Back: Writings By Radical Women of Color (4th Edition, 2015) edited by Gloria Anzaldúa [Book]

“A groundbreaking collection reflects an uncompromised definition of feminism by women of color.” Along with Cherríe Moraga, Anzaldúa co-edited this anthology.

“In this memoir-like collection, Anzaldúa’s powerful voice speaks clearly and passionately. She recounts her life, explains many aspects of her thought, and explores the intersections between her writings and postcolonial theory. For readers engaged in postcoloniality, feminist theory, ethnic studies, or queer identity, Interviews/Entrevistas will be a key contemporary document.”

“This reader–which provides a representative sample of the poetry, prose, fiction, and experimental autobiographical writing that Anzaldúa produced during her thirty-year career–demonstrates the breadth and philosophical depth of her work. While the reader contains much of Anzaldúa’s published writing (including several pieces now out of print), more than half the material has never before been published. This newly available work offers fresh insights into crucial aspects of Anzaldúa’s life and career, including her upbringing, education, teaching experiences, writing practice and aesthetics, lifelong health struggles, and interest in visual art, as well as her theories of disability, multiculturalism, pedagogy, and spiritual activism.”

“Ever since she can remember, Prietita has heard terrifying tales of la llorona — the legendary ghost woman who steals children at night. Against a background of vibrant folk paintings, Gloria Anzaldúa reinterprets, in a bilingual format, one of the most famous Mexican legends. In this version, Prietita discovers that la llorona is not what she expects, but rather a compassionate woman who helps Prietita on her journey of self-discovery.”

“Having crossed the Rio Grande into Texas with his mother in search of a new life, Joaquin receives help and friendship from Prietita, a brave young Mexican American girl.”

“Named for the Nahuatl word meaning “their soul,” IMANIMAN presents work that is sparked from the soul: the individual soul, the communal soul. These poets interrogate, complicate, and personalize the borderlands in transgressive and transformative ways, opening new paths and revisioning old ones for the next generation of spiritual, political, and cultural border crossers.”

Bridging: How Gloria Anzaldúa’s Life and Work Transformed Our Own (2011) edited by AnaLouise Keating and Gloria González-López [Book]

“The inspirational writings of cultural theorist and social justice activist Gloria Anzaldúa have empowered generations of women and men throughout the world. Charting the multiplicity of Anzaldúa’s impact within and beyond academic disciplines, community trenches, and international borders, Bridging presents more than thirty reflections on her work and her life, examining vibrant facets in surprising new ways and inviting readers to engage with these intimate, heartfelt contributions.”

“Mexican and Mexican American women have written about Texas and their lives in the state since colonial times. Edited by fellow Tejanas Inés Hernández-Ávila and Norma Elia Cantú, Entre Guadalupe y Malinche gathers, for the first time, a representative body of work about the lives and experiences of women who identify as Tejanas in both the literary and visual arts.

The writings of more than fifty authors and the artwork of eight artists manifest the nuanced complexity of what it means to be Tejana and how this identity offers alternative perspectives to contemporary notions of Chicana identity, community, and culture.”

This volume was dedicated principally to Gloria Anzaldúa.

“Delgadillo analyzes the role of spiritual mestizaje in Anzaldúa’s work and in relation to other forms of spirituality and theories of oppression. Illuminating the ways that contemporary Chicana narratives visualize, imagine, and enact Anzaldúa’s theory and method of spiritual mestizaje, Delgadillo interprets novels, memoir, and documentaries. Her critical reading of literary and visual technologies demonstrates how Chicanas challenge normative categories of gender, sexuality, nation, and race by depicting alternative visions of spirituality.”

El Mundo Zurdo: Selected Works from the Meetings of The Society for the Study of Gloria Anzaldúa 2007 & 2009 (2010) edited by Norma Alarcón, Norma Cantú, Christina Gutiérrez, and Rita Urquijo-Ruiz [Book]

El Mundo Zurdo 5 : selected works from the 2015 meeting of the Society for the Study of Gloria Anzaldúa (2015) edited by Domino Renee Perez, Larissa M. Mercado-López, and Sonia Saldívar-Hull [Book]

“A collection of diverse essays and poetry that offer scholarly and creative responses inspired by the life and work of Gloria Anzaldúa, selected from the 2015 meeting of The Society for the Study of Gloria Anzaldúa.”

“As self-identified lesbians of color, Paula Gunn Allen, Gloria Anzaldúa, and Audre Lorde negotiate diverse, sometimes conflicting, sets of personal, political, and professional worlds. Drawing on recent developments in feminist studies and queer theory, AnaLouise Keating examines the ways in which these writers, in both their creative and critical work, engage in self-analysis, cultural critique, and the construction of alternative myths and representations of women.”