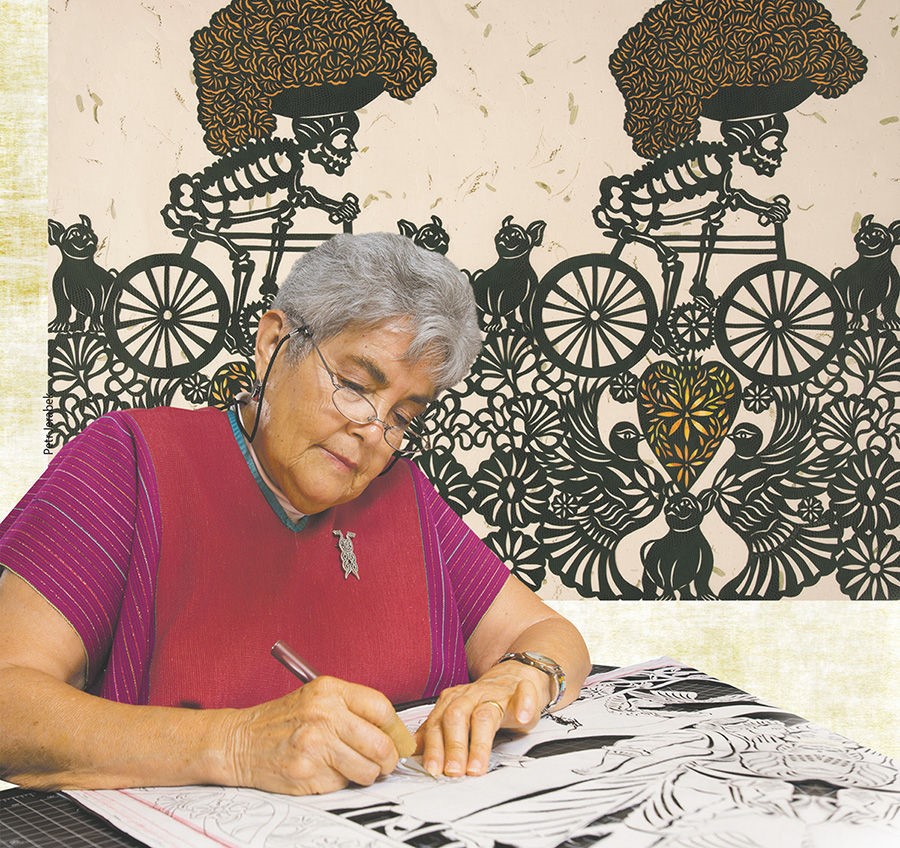 The Benson Latin American Collection is pleased to announce the acquisition of the Catalina Delgado-Trunk Papers. Delgado-Trunk is a Mexican-born artist known for her work in the intricate papel picado art form. The contents of the papers include correspondence, program materials, press releases, news clippings, exhibit slides, and files. Undoubtedly, the true gems of the acquisition are the approximately 250 sketches, drawings, and drafts that Delgado-Trunk created to document her process as an artist.

Delgado-Trunk is no stranger to The University of Texas at Austin. She earned her BA in French with a focus on literature here in 1965, and the city holds a special place in her heart, for it is in Austin that she met her husband Jim, then a student at St. Edward’s University. After graduating, Delgado-Trunk pursued a career in teaching French and ballet while raising two children at home. However, her decision to reenroll in a visual arts program at the age of 49 is what set her on a path of artistic self-discovery that would reconnect her to her childhood in Mexico City.

Since then, the artist has become world-renowned for her expertise in papel picado, the rich Mexican tradition of elaborate and decorative paper cutting with roots in the Aztec use of a rough paper called amatl. The art form took off with the introduction of a thin tissue paper from the Philippines that arrived during the colonial era.

The process of creating high-end papel picado is painstaking and intense. Delgado-Trunk employs a strict routine that consists of researching the Mesoamerican subject matter through countless books, sketching rough drafts on graph or clear print paper, copying the final drawing onto an architectural copy machine, stapling the copy-paper drawing to a final sheet, and then using an x-acto knife to cut out the negative space. The x-acto knife portion alone can last 10 to 40 hours. Finally, she glues the cutout work to an acid-free fine art paper background.

Papel picado interests Delgado-Trunk for its cultural synthesis. Asian, indigenous, Iberian, and African influences all worked together to foster the art form through goods, trade routes, and subject matter. Delgado-Trunk, who grew up in Mexico during the 1940s and 1950s, an era marked by the promotion of cultural syncretism as found in the artwork of Frida Kahlo, Diego Rivera, and David Alfaro Siqueiros, pays homage to this period through her pieces. For two decades now, the artist has made works that blend pre-Columbian stories and images with subjects from the contemporary world, such as Mexican Catholic iconography. Camino al Mictlán and Las Tres Catrinas are two examples of her fascination with indigeneity in Mexico, while Mestizaje highlights the cultural syncretism between indigenous and European groups.

Aside from her own pieces, Delgado-Trunk has been instrumental in passing on her knowledge to younger generations through workshops and classroom visits, particularly in New Mexico, where she now resides. Her papers include many thank-you cards from students and teachers whose lives she has affected. Her impact has been noticed: among her many awards are the 2015 Annual New Mexico Governor’s Award for Excellence in the Arts, a 2013 Acknowledgment and Recognition by the Bernalillo County Board of Commissioners in New Mexico, and a 2005 Award of Excellence from the New Mexico Committee of Women in the Arts. She has also exhibited her works in places as prestigious as the Smithsonian’s National Museum of the American Indian, the Museum of Contemporary Art in Kanazawa, Japan, and the Museum of International Folk Art in Santa Fe.

The Catalina Delgado-Trunk Papers will make for a wonderful addition to the Nettie Lee Benson Latin American Collection, which houses strong archival collections related to art, such as the Carmen Lomas Garza Papers and Artworks, the Marta Sanchez Papers and the Romo Collection of Mexican American Art Prints. In particular, this new collection promises to be of interest to scholars focused on art and Mexican and Mexican American cultural studies.

Daniel Arbino is Librarian for US Latina/o Studies at the Nettie Lee Benson Latin American Collection.