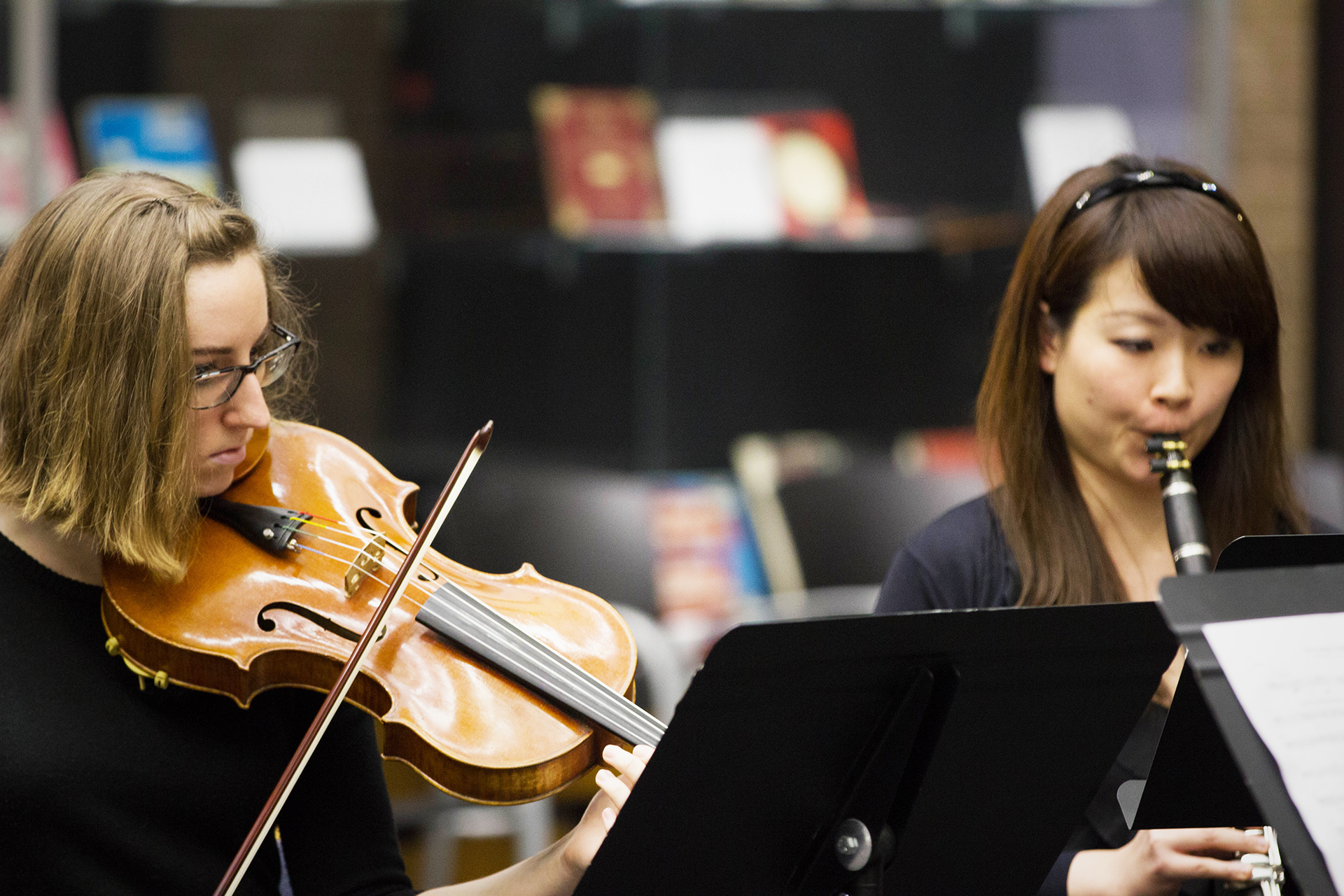 Excessive Noise is an occasional concert series hosted by the Fine Arts Library.  Organized by Russell Podgorsek — who earned his doctorate at the Butler School of Music and is an employee of the Fine Arts Library — the series provides students with an opportunity to perform chamber and solo works beyond those required by their degree programs.  It also provides an opportunity for the premier of original works beyond the classroom.  While generally in the classical vein, Excessive Noise features work from a variety of traditions and perspectives.

The newest installment of “Excessive Noise: Not Just the Notes” takes place this Friday, March 8 in the Fine Arts Library, just in time to warm up for SXSW. The show is free and starts at 6 p.m.

Podgorsek and his co-curator for the concert, Jessy Eubanks, took a moment to answer a few questions about the series and Not Just the Notes.

So, how did you come up with the concept for Excessive Noise, and what were your goals for the program?

Russell Podgorsek: I started Excessive Noise back when I was a doctoral student in music and a GRA at the Fine Arts Library (FAL). Recently retired music librarian David Hunter mentioned that they’d previously had a concert series there and strongly suggested I start it up again. At first, it was just a nice vehicle to have some other performance opportunities for student performers and composers, and capitalize on the surprisingly good acoustic in the FAL, but as the semesters went on we had more alumni, Austin music community members, and even a few guests from out of town perform. We’ve had programs with speakers from Asian Studies, a feature with the Maps Collection, and more recently featured ensembles like invoke and Hear No Evil, allowing them to program the entire event. In other words, I think it’s come to be more a celebration of the library as a community hub, as a place where you come to share and explore ideas. I should add that UT Libraries has been consistently supportive of the series and not only do we appreciate it, but patrons also tell me after every concert what a nice tradition it’s become for them.

You’ve really engaged the community with the series by presenting programming that might otherwise be familiar almost exclusively to people associated with the Butler School or the College of Fine Arts. Can you explain how you settle on themes for the individual events? Is that your own conceptualization, or are you co-curating with the performers?

RP: At first there were no themes really; I was just asking whoever was around and interested in playing to play, and of course I programmed one of my own pieces on each concert. But once the series was had been around for a year or two and the old reference stacks were replaced with shorter, newer ones, the place attracted more interested performers. In some cases, like with the collaboration with the Maps Collection back in 2014, the materials we wanted to showcase dictated the “theme”. For that concert we even had five pieces newly written based on maps of Chicago from the collection. The Orient-Occident performance was a more generalized “East meets West” theme that came out of my own interaction with Japanese culture. We had a DMA composer at that point from China and several grad students from Pakistan at BSOM so the pieces just fell into place. More recently, I’ve had ensembles provide their own programs, although the last concert was a joint programming venture with Hear No Evil (we did two of my pieces with them and they supplied the rest). So, I guess the short answer is we’ve done it almost every way one could. This time around I’ve handed the programming off to the not just the notes collective. The director is one of my students and the co-directors former students of mine, so I’m more of an advisor for the time being.

What’s the story with Not Just the Notes? This seems like an extension of the ensemble programming, but perhaps in a new way.

Jessy Eubanks: Not Just The Notes is more of a concert series than an ensemble. We program new music written by UT composers, and focus on non-musical themes and collaboration. For example, this concert program consists of pieces about how humans interact with the environment, and current environmental issues. We needed a venue for our first concert, and Russell was very kind in letting us use the Excessive Noise series as a host.

One of the great things about the Excessive Noise series is that it gives campus composers the chance to share new material and to experiment in a performance space. Not Just the Notes seems to be a great fit for the series because of that. Can you talk a little about the nature of collaboration in the program, and maybe offer a peak into what folks can expect from the performances?

JE: Our first collaboration will include the Campus Environmental Center. We’ve worked with by inviting them to our event, and they’ll have a table set up at the concert to answer questions and share some about the work they do around UT. It’s been really cool to make that connection. As for the performances themselves, each piece deals with a different aspect of how people are interacting with nature and the environment, things like that, and some send very strong messages about current issues such as deforestation or over-consumption.

The program is titled “Green Paw.” Can you talk about that and who will be performing?

JE: All of the performers are UT students, but a number of pieces have no performers at all- they are solely electronic or fixed media. Other pieces are a combination and feature live players with electronics.

The title Green Paw is a reference to the environmental theme of the concert, we thought it sounded cool and wanted a way to differentiate between this concert and (hopefully) future concerts.

What are you planning for the future programming of Not Just the Notes? And what can we expect in the future from the Excessive Noise series?

JE: For Not Just the Notes, one area we’re hoping to explore is working with other students in the arts, such as dance or visual arts. There’s already so much potential in the College of Fine Arts alone, but we don’t want to limit ourselves. For example, there are also many music students involved in computer science, and it’d be very interesting to work creatively with them. There’s tons of options, and we’re also open to anyone coming to us with ideas for collaboration!

RP: I’ve got a couple of potential programs in mind for the future of Excessive Noise: a revival of a really successful project called “Sehr Flash” that we mounted back in 2016 at BSOM and the Texas Book Festival in conjunction with lit-mag NANOFiction, and a “new common practice” concert for which we’ll have several new pieces written all with the same stylistic constraints (the OULIPO groups does this kind of thing in the world of literature). Also, depending on how things shape up in terms of scheduling soloists, we may have a steel drum feature sometime soon.