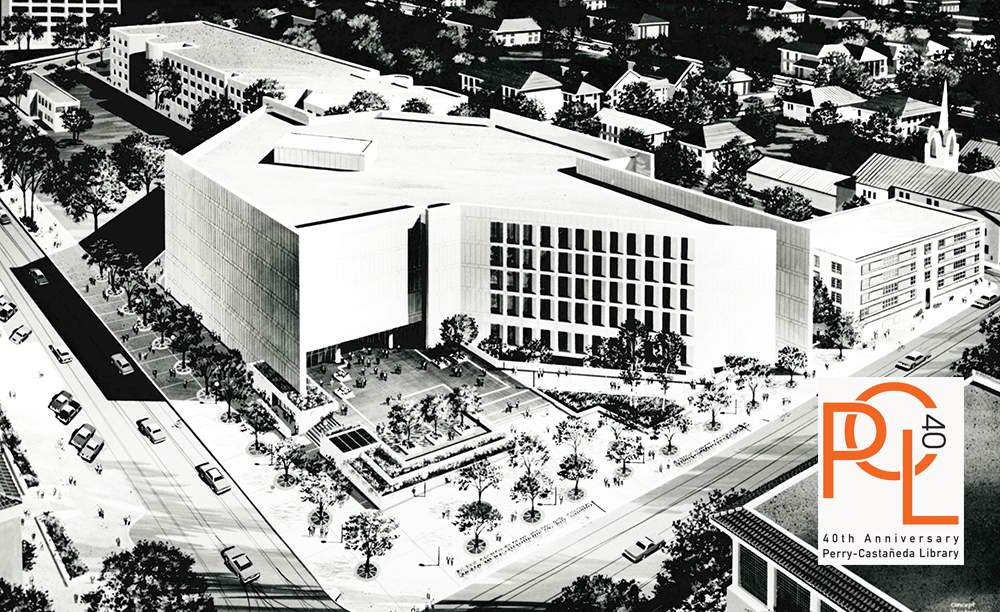 Since the birth of The University of Texas at Austin in 1883, the history of the University of Texas Libraries has consisted, in large part, of the construction and habitation of a series of buildings designed to support a constantly expanding collection of resources for an ever-growing community of people. When the original library in Old Main quickly outgrew the meager space there, it was moved twice before finding a dedicated home in Battle Hall in 1911. Just a couple of decades later, the 27-story Tower was constructed with the express purpose of becoming the “permanent” home of the university’s library collections. But, if history has taught us anything, it’s that you can never have enough resources to satisfy the intellectual curiosity of this campus.

And so it was that in late August of 1977, the university threw open the doors of its most ambitious library structure to date — a massive 6-story monolith just southeast of the original Forty Acres with a capacity for more than 3 million books — and students flooded into the new Perry-Castañeda Library.

The PCL was originally proposed to support 15 years of collections growth — a relatively modest expectation given the investment, but one that probably recognized the potential for nascent technologies to effect how information would be stored and used. Little could our forebears have conceived, though, the present that now exists. The Libraries eventually exceeded the space needed to contain the whole of its physical collections, but the revolution in library transformation spawned by the internet and the rise of microcomputing technology has simultaneously created new opportunities and challenges for reimagining the concept of library space.

As we celebrate the 40th birthday of this beloved building, we judge that history has served us well. The library played a critical role in the age dominated by physical materials — especially at the leading institutions of higher learning, where costs of materials and space have been the necessary sacrifices to bear in support of learning, innovation and discovery. Today, however, the environment is different. Users have different needs, and constantly shifting needs that track to technological innovation. And the library still plays a critical role — we are a bridge between the old sensibility and the new.

For years, the PCL was known mainly as the campus destination for finding the book. Today, it’s increasingly becoming something more…a place where the book still exists, but as a component in an ecosystem that has moved beyond that of passive provider of information, and toward that of an active partner in teaching, learning and research and in the creation and realization of ideas. The spaces that once served as holding areas for physical materials now increasingly accommodate services for writing support and tutoring, technologies for productivity and visualization and environments for interpersonal experience and collaboration.

How do we prepare for tomorrow given the pace of change today? The library has always been a place, a location, and the library’s evolving purpose will likely be similar, but also different. It will be enhanced and dynamic, where the various media of information will not sit idly on shelves, but will move in streams that can meet, expand and re-form almost instantaneously with a community of people from across the globe.

As we commemorate what the library — this library, in particular — has been and what it has become, let’s also look forward with great anticipation and hope to a vibrant and exciting future at UT, and well beyond.