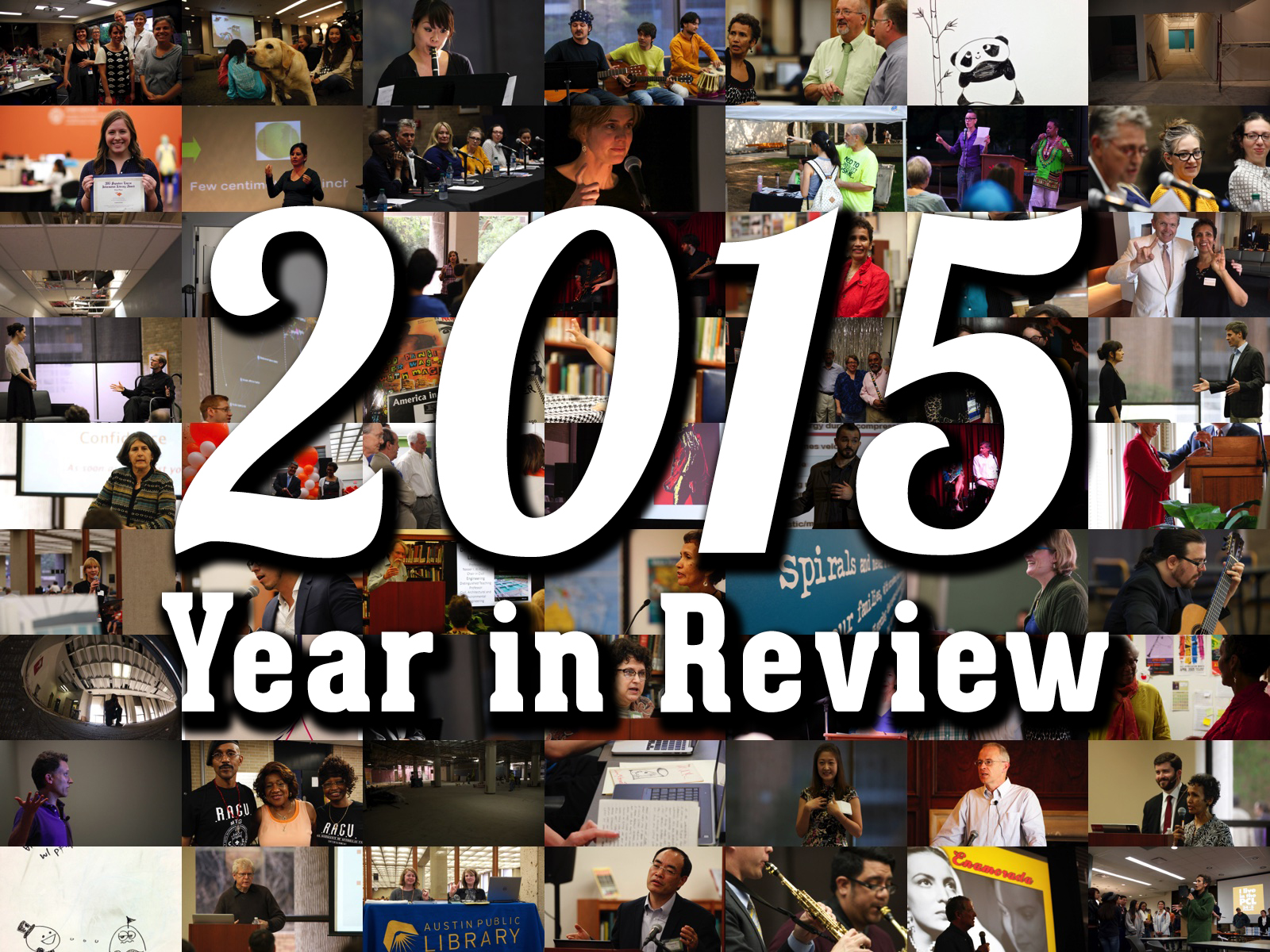 It’s been a year of change at UT and the University of Texas Libraries, with the arrival of new leadership and major transformations taking place across the campus.

As we prepare to close out the final page on the calendar, it’s worthwhile to take a look back at a year in which the Libraries and the university entered a period of renewal.

As staff eagerly anticipated the arrival of a new director after the departure of former Vice Provost Fred Heath, construction began on the Learning Commons at the Perry-Castañeda Library in January — a 20,000 square foot renovation that represented the largest transformation of space in the building’s history. The space opened at the beginning of the fall semester with an event featuring some 200 attendees including new UT President Gregory Fenves and Dean of the College of Liberal Arts Randy Diehl. With the relocation of the University Writing Center to its new digs in the Learning Commons, the PCL is seeing more activity than at any time in recent memory.

Lorraine J. Haricombe arrived in February from her previous post at the University of Kansas to chart a new course for the Libraries, bringing with her fresh ideas and perspectives as well as a record of successes in the field of open access. After a short period of acclimatization during the spring, Haricombe enlisted staff to help her envision and begin to implement a new path for the organization, one that has grown in momentum to the current day.

Cultural advocates Theresa Lozano Long and Nettie Lee Benson were honored in a ceremony with leaders, family, friends and supporters at Sid Richardson Hall that saw the unveiling of twin plaques recognizing the great ladies’ contributions to the Latin American Studies at the university in March.

The Libraries’ propensity for fostering creativity manifested itself in a successful crowdfunding campaign to raise money for the construction of a recording studio at the Fine Arts Library (FAL), and in the continued pilot of the Media Lab at PCL that provided students a technology rich resource for work on modern multimedia projects.

A pair of NEH grants buttressed research support efforts by the Libraries as staff committed more energy to seek public funding for essential projects. And a grant from the Hearst Foundation provided a boost for the construction of a broad-ranging makerspace — The Foundry — at the FAL, which will support students across campus, but especially in the new Creative Arts, Entertainment and Technology program announced this year at UT. 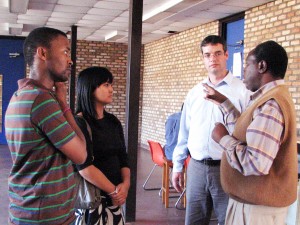 Partnerships at home and abroad evidenced the way in which libraries can contribute to the preservation of and access to the historical record. A web-based medieval mapping project — MappaMundi — launched after a collaborative effort involving Libraries technology staff and faculty from the College of Liberal Arts, and partners in Kigali and Great Britain announced the launch of the expanded and updated Genocide Archive of Rwanda, marking the latest grand success of a years-long relationship.

The Libraries continued its popular run of programming, with entertaining and informative events in the form of Science Study Break, Research + Pizza, Films in Person, Excessive Noise concerts, the Distinguished Author Dinner, and exhibitions from the Benson Latin American Collection and the Architecture & Planning Library’s To Better Know a Building series. 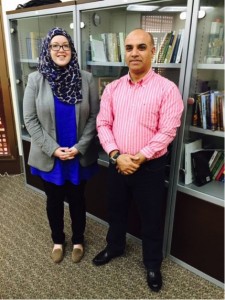 And collections continued to grow, especially in areas of distinction, thanks to the hard work of staff who circumnavigate the globe in search of rare and niche materials — as Telugu pulp fiction acquired by a bibliographer in Hyderabad — and by donors, as well, who provide resources in new and underrepresented subjects to benefit current and future researchers — like the Freud Reia punk collection, now part of the Historical Music Recordings Collection.

Plenty of other gains were made this year, but it would be remiss not to talk about a few noteworthy losses the Libraries experienced, too. Along with the normal churn of staff that occurs over time in an organization, we saw a late-year spate of retirements by some of our foremost and long-serving librarians. Engineering Librarian Susan Ardis, Life Sciences Librarian Nancy Elder and Physics-Mathematics-Astronomy Librarian Molly White all contemplated careers of success and left behind their respective legacies for the next generation. Colleagues have honored their contributions with the career reflections offered below.

Susan used to tell us that she’d been around since dirt was a baby but actually she started work as Head, Engineering Library in 1979.  She came to Austin after serving Galveston’s Rosenberg Library as Head of Reference.  It was Michigan (and Wisconsin) before Texas.  Susan’s B.A. (History) and A.M.L.S. (Library Science) are from the University of Michigan.  She stayed on at Michigan to work in Cataloging, and then for six years was Head of the Natural Science Library.

During Susan’s time at the Engineering Library, valuable endowment funds were added; society publications and technical reports were brought into good order.  Engineering was the first at UT to remove the card catalog, to add a CD-ROM index, and to offer computer-aided instruction.  Also, Engineering was among the first to offer public computer printing and a computer lab.  Engineering became a U.S. Patent and Trademark Depository Library.  Susan oversaw the opening (and then the closing) of the Balcones Library Service Center.  After Virginia Phillips’s retirement, Susan added responsibilities as Head, Science Libraries Division.

Susan wrote three books and numerous articles.  She taught credit classes at UT and (online) at San Jose State.  Additionally, she taught patent workshops for the Texas State Library and for SLA (Special Library Association).  She won an innovation award from SLA.  A particularly big adventure was a consulting job that took her to libraries in Viet Nam.

Colleagues remember Susan as full of energy and always ready with innovative ideas in support of providing better library service.

I had the pleasure of working with Nancy for 16 great years and I cannot say enough what she has meant to me. As mentor, friend and colleague, she’s been an inspiration for all of us at UT Libraries.

One of the most memorable times with Nancy was during my interview for the position I hold now at the Marine Science Library. She, Virginia P. and I flew in a small state plane to Port Aransas to meet with MSI faculty and staff. My nerves were already scrambled just thinking about the interview and flying in that “puddle jumper” really added to my nervousness. I remember Nancy telling me, “it’ll be okay.”

Nancy was an instrumental part of the Science Team, sharing her wisdom and keen sense of wit. She always had this knack for providing great analogies when describing certain points, whether it was work-related or just part of daily life. Loved it! Nancy was open, honest and good-hearted and because of that, she entrusted me with the Marine Science Library. I respected that very much and could not have asked for a better working relationship.

With all that comes with retirement, I wish you a happy one, Nancy. It’s been a blessing to work with you and I shall miss you, as we all will.

Molly White joined the Science Library crew in 1987. I had been here for two years, but Molly was already an old timer with a deep institutional memory. She had been an undergraduate and a Library School Master’s student at UT, and worked for the Libraries as early as 1968. She worked in the Tower when it was still the Main Library, she worked in a number of other units, and during that period she also took a long break and worked for Texas Pacific Film in Austin, so she has deep ‘old Austin’ cred. When she came to the science group, she was at the Balcones Service Center and at Life Sciences before she became the PMA Librarian in 1991.

Molly took on a formidable group of traditionalists in her disciplines, and despite a rough couple of years during our first wave of serious journal cancellations, she rose above it and developed strong working relationships with all three groups, working back and forth across the lines to develop new technologies and services while maintaining the core capabilities that her scientists required. She has also wrestled with the vagaries of her space, spearheading a number of improvements that made PMA a better and more user friendly library.

Molly took a keen interest in our organization, and has served on numerous projects, committees and task forces through the years, as well as in the profession, where she has been very active in the Physics Mathematics Astronomy Division of the Special Libraries Association and served on a number of science publishing advisory groups. Her colleagues know her as someone willing to ask difficult questions, and work with a team to find good solutions. Molly has been a real contributor, a good colleague, and a friend. I am grateful to have had her as a member of our team, and we will all miss her.

One thought on “Looking Back”