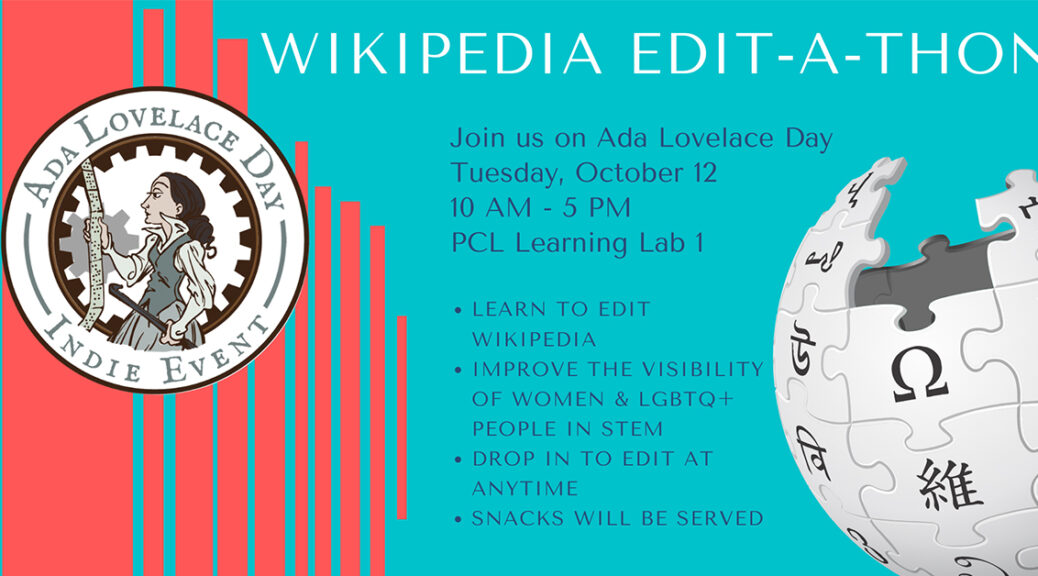 Ada Lovelace Day is an international celebration of the achievements of women in science, technology, engineering and math (STEM). Since 2009, its purpose has been to increase the profile of women in STEM and, in doing so, create new role models who will encourage more girls into STEM careers and support women already working in STEM. The day is named in honor of Ada Lovelace, an English mathematician and writer who is best known for creating the first computer algorithm.

UT Librarians Gina Bastone, Lydia Fletcher, and Hannah Chapman Tripp organized the 2021 Ada Lovelace Day Wiki Edit-A-Thon to build on the success of the 2019 event. The goals of the edit-a-thon were to improve the visibility of women in STEM fields, to teach first-time editors the quirks of Wikipedia editing, and to involve more gender and racial minorities and LGBTQ+ people in the Wikipedia editing process. Due to the continued uncertainty about COVID-19, we opted to make the event this year a hybrid one by offering both an in-person drop-in event where folks could learn something, grab some food, and edit in between classes as well as a Discord-based online version.

As with the 2019 event, we wanted this year’s to be largely self-guided. We emphasized starting the research process and identifying useful Wikipedia-friendly sources by offering a list of potential pages to edit, update, or create. We organized the day through a system of Google Drive links (for those engaging through Discord) and physical sticky notes (for those attending in person) to ensure that only one person would be editing one article at a time, while retaining the ability to have more than one contributor to each article on the day. For example, we had one person begin editing the article on Cora Sadosky’s research before passing it off to a graduate student in mathematics who could better understand and explain Sadosky’s works. We also worked on creating a Wikipedia page for the new Dean of the Jackson School, Claudia Mora.

Once again, we worked with student groups in the Colleges of Natural Sciences and Engineering to promote the event. Hosting the event in a hybrid format presented some new challenges, but ultimately taught us a lot about navigating engagement in the “new normal” and we look forward to the 2022 event!