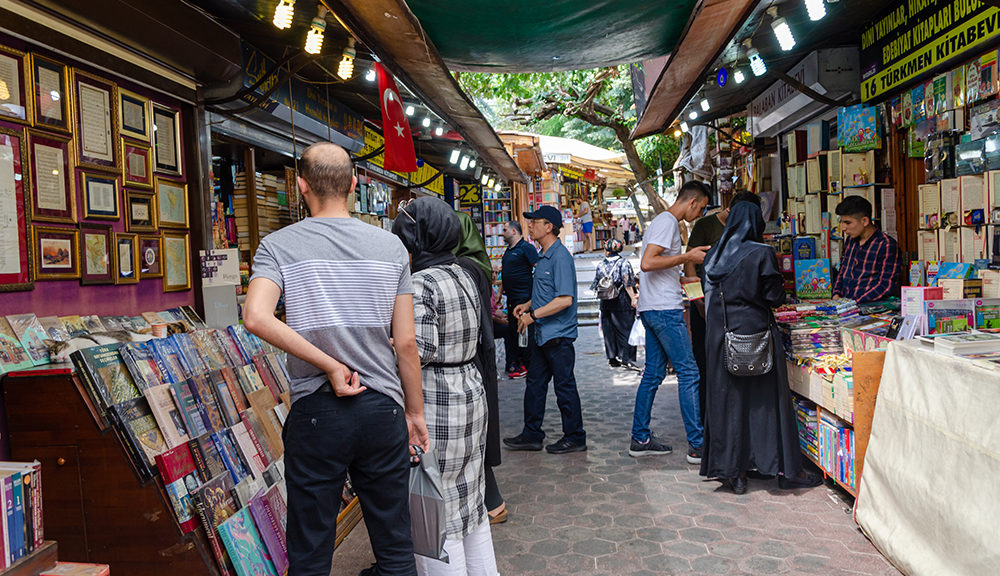 Traveling internationally to secure unique and distinctive acquisitions for UT Libraries and to make essential academic connections for UT Austin is one of the true joys of serving as Middle Eastern Studies Librarian. In June of this year, I traveled to Istanbul, Turkey, for two weeks. I focused on collecting Arabic titles published in Turkey and investigating study abroad opportunities for graduate students in the Middle East and Islamic Studies programs at UT.

I had the pleasure of flying into the brand new Istanbul airport, located on the opposite side of the city from the stalwart Atatürk Airport that I knew so well. I arrived at the end of Ramadan, which meant that I got to enjoy Bayram (the Turkish name for the festival celebrating the end of Ramadan) sales. I stayed in the neighborhood of Kuzgüncuk, a small, religiously diverse section of the city on the Asian side of the Bosphorus, just before the first bridge. There were several local book and magazine sellers, as well as produce vendors. It was from one of the local produce vendors that I learned of a children’s bookfair happening on the Asian side of the city, and I made a plan to visit it in the coming days.

While in Istanbul, I was able to receive a title for which I had been hunting in Egypt, Majallat al-Qaḍāʾ al-Sharʿī. There are only a handful of copies of this title around the world; yet, it is a crucial source for the social and legal history of early 20th century Egypt. So what makes a “rare” book in Islamic Studies, like this one?

Researchers at U.S. universities may often conceptualize a rare book as something necessarily old, a “first edition,” a banned title, etc. These are all potential markers of a rare book or special material, but they are not the only factors that librarians consider when making acquisitions for their collections. Consider government/official publications. They are often ephemeral in that they arere published for one run; they are often difficult to find because they are seen as an archival burden for someone else (presumably the government or organization); and, on top of all that, they may on the surface appear dull, dry, or irrelevant to deep (particularly historiographical) analysis. Even if one decides to go after government publications, it can be nearly impossible to track them down for these reasons. When I do manage to track them down, I’m often asked, why this?

Thanks to this acquisitions trip, I managed to obtain a copy of Majallat al-Qaḍāʾ al-Sharʿī, a briefly-issued publication of a judicial training school in Alexandria. It includes articles by figures who would end up shaping the Egyptian judiciary for decades to come, and provides insights into the political history of early 20th century Egypt. Cautiously, I may say that the UT Libraries will be the sole North American institution with the full set of volumes for this title (they are in processing now).

During my time in Istanbul, I also had opportunities to explore new and old publications and to learn more about the current frontiers of Islamic and Middle Eastern Studies scholarship. I visited the Hilye-i Şerif ve Tesbih Müzesi (museum of manuscripts honoring the Prophet Muhammad, and prayer beads) to see excellent exhibits of stunning manuscript illumination and religious arts. I also stopped in to the official government Turkish manuscripts publications office to check on the latest Arabic and Ottoman editing developments. Additionally, I had the pleasure of meeting up with a PhD candidate from Princeton University, to hear about her research and projects and to get the impressions of a junior scholar on the state of research in Turkey and other parts of the Middle East.

As my trip continued, I reflected on how book buying can be simply wandering around––somewhat aimlessly––and relying on serendipity (although I admit to wandering neighborhoods known for bookshops; I cannot leave everything up for chance). I found myself in awe of the materials selection available in the average bookshop. Stopping in at one in Üsküdar (Asian side of Istanbul), I found books in Turkish, Arabic, French, English, and German; translations of seminal works such as the biography of Muhammad Ali; Turkish conference proceedings that fill gaps in our collection; a large and diverse children’s section; premier Turkish Studies scholarship; and popular hero fiction.

There was a sign in the bookshop that read “3 books, 10 Turkish lira.” The shelves below it were a gold mine of popular fiction that will augment UT Austin’s Turkish literature collection and expand the options for our students to read during their intensive study of the Turkish language. I was able to procure them at a fraction of the price we would normally pay through other venues.

Additionally, I had the pleasure of meeting up with Murteza Bedir, Dean of the Faculty of Divinity and Professor at Istanbul University. We spoke about our research projects, upcoming conferences, recent publications in Islamic Studies, and Turkish Islamic Studies graduate programs.

Professor Bedir also took me to the symposium on the history of science in honor of the late Fuat Sezgin at Istanbul University. Scholars from around the world—Turkey, U.S., Uzbekistan, and others—presented their latest research and reflected on Sezgin’s contributions to the field. It was quite a time to be in Istanbul.

I continued my work making critical connections as the PCL and the UT Libraries Middle Eastern Studies librarian for both collections and scholarship opportunities by meeting with Recep Şentürk, professor of sociology and president of Ibn Haldun University in Istanbul, and some of his advanced graduate students. We met at the university’s Süleymaniye campus, housed in an Ottoman-era madrasa next to the Süleymaniye Mosque, following their class on Abu Hamid al-Ghazali’s Ihya’ ‘Ulum al-Din. Professor Şentürk knows of my interest in Arabic critical editions produced in Turkey, and graciously brought the first publication of the Ibn Haldun University Press—Mulla Gurani’s commentary on the Qur’an—to share with the UT Libraries. UT is the first university library in the world to acquire this edition, and I look forward to following the publications of this new press.

I am grateful for, and awestruck by, the generosity and hospitality with which I was met in Turkey, and which made my trip possible. I extend my sincere gratitude to the UT Libraries and the Center for Middle Eastern Studies for supporting my travel and acquisitions in Istanbul this year.