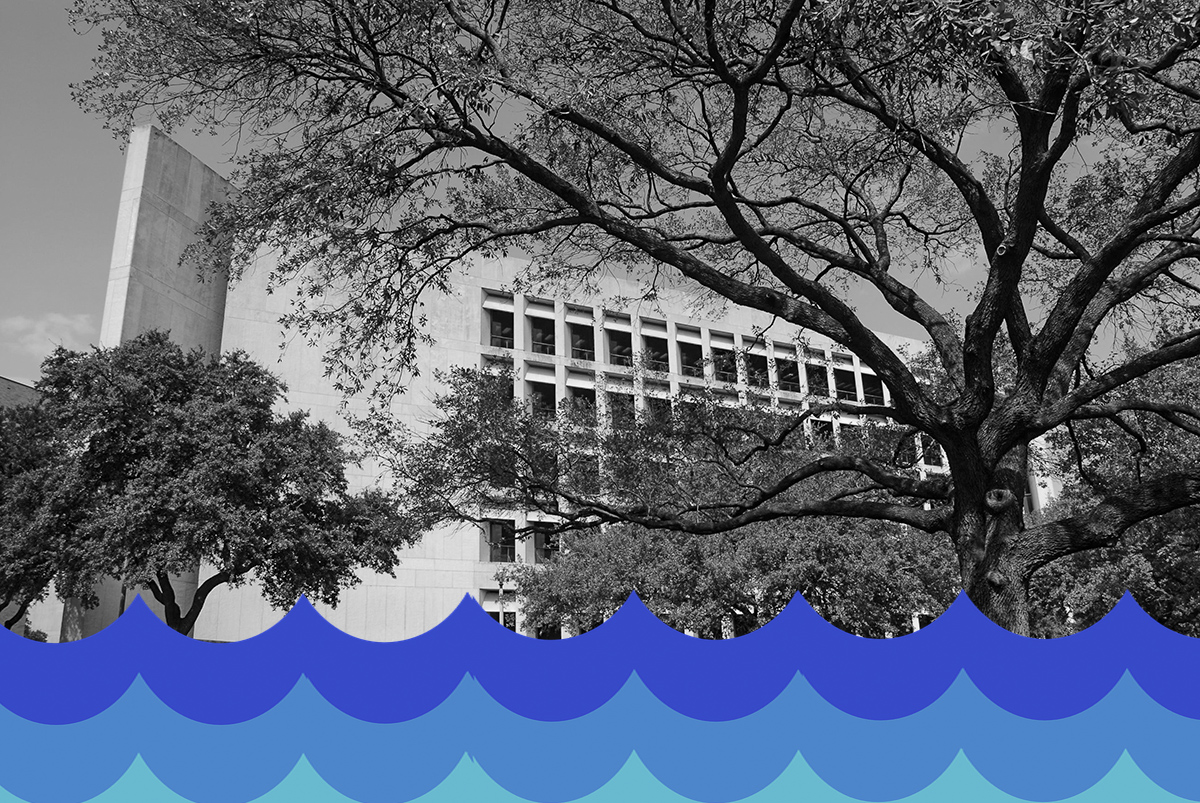 The Perry-Castañeda Library got a bit damp from the recent wet weather. A little too damp, actually.

On Friday, May 3, the Austin area experienced a series of thunderstorms beginning late in the afternoon that dumped a little over 4 inches of rain in the span of a few hours; not a remarkable amount in normal circumstances, but enough to create problems when you have a hole in the side of your building due to a ground-level construction project.

As a result, the unfinished drainage system being incorporated for the construction of the university’s Admissions Welcome Center wasn’t able to handle the volume of water and allowed a significant amount of water entered through the site and into the operational areas of the basement (1st) level at PCL.

“This is not unusual or considered a failure of the system; it’s simply an in-progress state,” said Jill Stewart, associate director of Project Management and Construction Services. “Due to the nature of incomplete work, the site had not been graded in such a way to purposefully direct water away from the Welcome Center site.”

By that evening a student who noticed pooling water on the ground floor reported it to Libraries staff, and when facilities and preservation personnel were notified of the emergency they activated protocols to protect materials and enlisted the contractors to tackle the larger problem. Staff stayed into the early morning hours to assist the contractors in sandbagging the vulnerable construction area and coordinating with a water damage vendor to begin remediation of the affected spaces and prevent further spreading of moisture into other areas of the building.

Roughly half the floor was affected by flooding, including the InterLibrary Services, several offices for Libraries technology staff and the Texas Digital Library, and the area behind the service desk in the Map Room.

Given the dramatic nature of the incident, the Libraries collections and building fared quite well. The only library materials damaged were ten maps which were triaged and treated for water damage on the night of the flood — all of which have been salvaged for future use— and other items that were at nominal risk were nonetheless relocated for protection. The building level itself was inspected and treated to ensure the containment of moisture with a battalion of dehumidifiers and fans deployed throughout the floor, which ran nonstop for the days required to fully dry out the space.

Director Lorraine Haricombe was laudatory of the staff’s quick response to the emergency.

“We all, of course, wish this had not happened, but I am thankful that our library – and our University – can count on such dedicated and resourceful staff to respond when these things do happen,” said Haricombe.

“A number of staff members at PCL on Friday stayed long past their scheduled shifts and others came in from home or other locations, despite the downpour that evening, to help deal with flooding in ILS and the Map Room. Their efforts made it possible to move hundreds of collection items out of harm’s way and minimize damage to the collection.”

Aside from some temporary inconveniences to relocated staff and the chagrin of principals on the construction project, we consider ourselves pretty lucky. The concerted response by all involved has resulted in a speedy return to normal just in time for summer break.