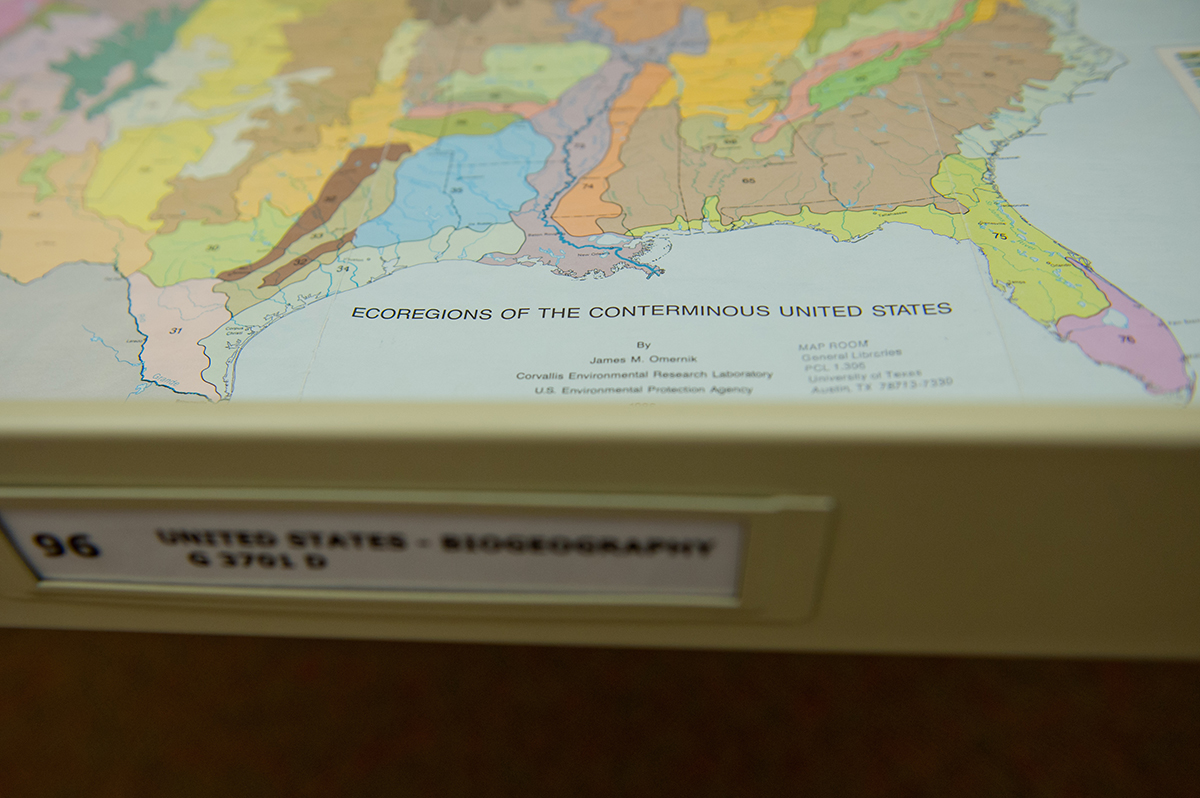 “In 1994, we decided that we were going to scan maps,” says Rascoe. “We had a Macintosh computer and a Mac scanner, which I believe cost $100. We had a plan to put them in sort of a web menuing system called Gopher, but fortunately, simultaneously with our wanting to put maps online, the first web browser was introduced in that year.”

Fortuity aside, the decision of which maps to begin the scanning project with stirred up interest in digital access from an unexpected party. Rascoe started with some pretty rudimentary maps from the Central Intelligence Agency, which made sense given the storage limitations at the time.

“The CIA called me and asked, ‘How do you get our maps to look so good online?’,” relates Rascoe. “So I put my student assistant on the phone to give them some photo editing techniques, which is unusual because they create born-digital at CIA. But they’ve come a long way…we’ve all come a long way since then.”

To date, more than 70,000 maps from the printed collections have been scanned and added to the digital side of the PCL Map Collection, providing access to a vital resource not just to the university community, but to a global audience. And Rascoe says that more maps were scanned last year than in all previous years combined, so there’s both a will and a mechanism to expand access to the collection.

One of the benefits the PCL Map Collection has over other collections of the sort is being collocated within a top-ten research library where thousands of additional maps reside in books and journals as fold-outs and plates that are easily accessible and duplicable.

“We’ve been able able to go through our government documents and our impressive book collection in the library, actively looking for public domain maps that are hidden in books,” explains Rascoe. “One of the things that Google Books can’t do is scan folding maps in a book. But we can do that.”

“We’ve discovered a lot of things over these many years with the staff going through our collections, so we’ve leveraged the collections to get content up online. And now you can find it in Google, so we’ve made discovery easy.”

A wide variety of customers use the collection: faculty researchers; students planning canoe trips; engineering firms working on impact statements; hobbyist genealogists searching for the location of long-forgotten historical places; and by environmental consultants, developers or property owners who may be interested in all editions of maps for potential property development uses.

The map collection is widely used by students, faculty and people of all stripes to fortify research, as well as for use in discovery and as tools for teaching or learning. And the maps inhabit a vital space within such a myriad of disciplines that an institution desiring to have comprehensive resources to support its research must assume maintenance of a vast collection of cartographic materials spanning a vast reach of time. 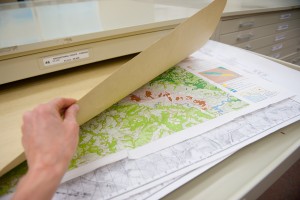 “Every type of map has its own value,” says Rascoe. “We have research on campus covering all parts of the world, so our community uses every area of the collection.”

Despite the expansion of maps made available by the evolution of the internet, the collection still receives fairly regular inquiries from media organizations, especially during times of political upheaval or natural disaster, both of which can strike unassuming regions that may not be familiar to American news consumers.

Katherine Strickland, who manages the PCL Map Collection, provides a recent example. “In 2014, when Crimea was voting on the independence referendum, I received calls from both CNN and the PBS NewsHour,” says Strickland. “I didn’t have exactly what CNN wanted, but we did find certain items that the NewsHour could use.”

Rascoe supposes that the dissolution of traditional media by the internet may be subtly benefiting collection usage. “There are only a few newspapers now that have a cartographer on staff,” says Rascoe. “But they certainly use our maps as background for making new maps, and we want people to use them.”

The collection also serves as a resource for high-level non-academic and humanitarian use, as well. The maps have been used for United Nations investigations, and by numerous non-governmental aid organizations.

“After the earthquake in Haiti a few years back we were able to put up a set of detailed topographic maps of Haiti right away,” says Rascoe. “It happens at times in the rush to respond to disaster that sometimes resources are either in short supply or overlooked, and in that case, we’ve provided much needed access. We have a lot of contact from the military thanking us for making the resources available and easily accessible.”

Because the online resources in the PCL Map Collection are also largely in the public domain, the site has become a ready resource for authors, artists, designers and production companies who need supplemental or decorative design elements for their respective work. In the last few years, Strickland and Rascoe have fielded inquiries from representatives from TV shows like NCIS (CBS), Homeland (Showtime) and Matador (El Rey) wishing to use maps found in the online collection as elements of production design, and its maps are regularly requested for publication in books or for documentary use.

Whatever the developments in technology, it seems that the PCL Map Collection will continue to grow apace as long as it maintains such a broad and far-reaching patronage that is thoroughly engaged with this valuable resource.

“We have a lot of requests for maps,” says Rascoe. “We have a pretty good idea of what people want, and they’re all over the map.”

To help grow the PCL Map Collection and keep it available for study worldwide, click here to make a contribution.